Mercury is a natural element found on the earth and pure form of mercury is liquid. Mercury is largely found in organic and inorganic compounds. It is found in many fishes and many other consumer products that we use daily. Mercury can produce toxic effects on the body depending on the intensity and amount it was consumed. Mercury traces are available in the ear when coal is burned. It will gradually settle down in the nearby water bodies which can be consumed by people.

Mercury has a good medicinal value for treating certain diseases but it can become toxic for humans. It is more toxic in people with lung problems or kidney diseases than in healthy persons. High doses of mercury can harm brain, heart and kidneys and it affects people of all ages uniformly. Mercury if inhaled by fetus can cause complicated nervous problem affecting the normal learning ability and thinking capacity of the child.

Shellfish contains an organic form of mercury by name methylmercury and people are easily exposed to mercury traces by eating this fish. However eating shellfish does not harm every person in the same way. There are many factors that determine the harmful effects of mercury.

Which form of mercury cause more damage, what is the level of dosage, what is the age and health condition of the person who is exposed to mercury, what is the duration/intensity of exposure, and which part of the body it was exposed are some of the major factors that decides the harmful effects of mercury in our body. Mercury can be ingested orally, it can penetrate through skin and sometimes it can be inhaled through nose.

Exposure of mercury by the fetus can impair the nervous system of the child moderately or severely depending on the intensity it was exposed. It can affect the brain’s development and reduce the memory and cognitive ability of the child. It can also affect the fine motor skills and visual skills in later stage of life. Most of the children are born with nervous system problems if their mothers are exposed to methylmercury by eating shellfish.

If mercury poisoning happens in elemental form it can cause symptoms of tremors, sleeping difficulty, mood swings, headache, neuromuscular changes, changes in nerve response, and impaired cognitive thinking. High doses of mercury can affect heart, lungs and kidney impairing its function. It can produce symptoms like severe mood disturbance, skin rashes and loss of memory. Some of the other signs of mercury poisoning are increased blood pressure and endometriosis.

Mercury outbreak in large volumes can happen due to industrial pollution of methylmerucry into the environment. Minamata disease in Japan is an example of mercury contamination. Several thousands of people were neurologically affected due to water contamination of mercury. Mercury poisoning can occur in any form like organic or inorganic or vapor forms. High doses of mercury can bind with sulfahydryl groups found in tissues and proteins causing intense damage to cells affecting vital organs like lungs or kidneys. Mercury vapor released in closed spaces can cause severe damage when inhaled. Accidental explosion can happen in laboratory setup that contains medical devices having mercury. 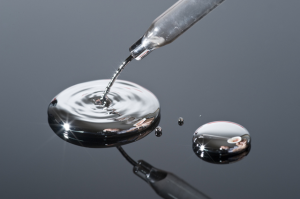 Even now many people are not aware that they have been exposed to mercury and hence they do not go for diagnoses. The symptoms of mercury poisoning are not sudden (expect for high doses) and hence it can take weeks or months together for producing symptoms. The signs are almost the same for Parkinson’s disease multiple sclerosis and dementia. The doctor will conduct physical examination and look for above symptoms like rash, fever and irritability and muscular weakness.

He would order for blood culture to detect the mercury levels in blood. Any reading below 10 micrograms per liter is considered to be normal. He may also order for urine analysis. Tests can be done for detecting the mercury level in red blood cells and blood plasma for distinguishing organic mercury from inorganic. If required he may do MRI scan and other imaging tests like X-ray for detecting the level of mercury poison.

Mercury poisoning should be treated early once symptoms are detected. Delaying the treatment can put your life at risk causing irreversible damages to your body. Sometimes there can be outbreak of mercury poisoning in the entire city or area. In that case it is necessary to remove all the people from the area for time being. The affected person should be monitored with a medical team closely. In case there is breathing problem due to acute inhalation of mercury vapor emergency first-aid should be provided with bronchodilators.

The person should be given drugs for inducing vomiting if he has ingested inorganic mercury since it can damage the tissues. The source of mercury poisoning is to be identified before deciding the course of treatment. Activated form of charcoal can be used for deactivating the toxic effect of mercury. The same method can be used for treating mercury poisoning caused by liquid mercury. Depending on the health condition of the patient he/she should be put on intravenous fluids to reduce the toxicity of mercury in the intestine. This will arrest the diarrhea and help for the recovery of the patient.

The mode of treatment is almost the same for organic mercury but can be less aggressive since it takes time for organic mercury to damage the cells of intestine. Common laxative medications are given for treating patients who have accidentally consumed mercury from broken thermometer. Not much damage is done on the gastrointestinal tract unless the person has severe ulcers or fistulas on his intestine.

Chelating agents are prescribed for treating mercury poisoning that is capable of binding toxic effect of mercury. Dimercaprol is often used for removing the toxicity of mercury from the cells. Dialysis is to be done for removing mercury particles from the kidney in case if it got mixed with blood. Dimercapto-succinic acid can also be used as effective chelating agent for removing both inorganic and organic mercury. To restore the impairment of motor functions neostigmine is commonly used. Polythiol is an effective agent used for removing mercury traces in bile duct. For treating any neurological problem in the affected person the doctor will refer the case to neurologist.

It is necessary to follow the instructions of your doctor until the traces of mercury has been completely removed from your body.

You have to identify the source of mercury that can cause adverse effect on your body and carefully avoid it. In case of industrial pollution the government and environmental department concerned should take precautionary steps for preventing spread of mercury poisoning by isolating the population from the hazardous area.

At home, you should be careful in isolating the potential source of mercury like thermometer and other disinfectants from children. You can contact the EPA immediately for knowing how to remove/dispose broken fluorescent bulbs etc at home. Some amounts of mercury are found in dental fillings like amalgam which are usually harmless. Avoid eating shellfish, shark and swordfish since it contains high mercury content.