Merkel cell carcinoma is a skin cancer that is rare in type and needs immediate treatment. It is also called as neuro-endocrine carcinoma since it affects the upper layer of the skin causing bluish red bumps on your face and neck. This problem occurs normally on elderly people and those who are exposed to hot sunlight for long time. Even if the immunity is impaired due to underlying health issues, merkel cell carcinoma can occur on the skin. The important feature of this disorder is it spreads very fast and difficult to control and hence requires immediate treatment.

This type of skin cancer may affect the face, neck and arms. It appears in the form of small red lesions or bumps on the skin and does not have any distinct appearance. It often attacks the skin area that is kept exposed to sun. The color of the bump can vary from pinkish red to reddish blue. In rare cases, the affected person may lose sensitivity to touch when nerve cells are impaired with functions.

Exact cause of MCC is yet to be found. But people who are aged, and those who are exposed to sun for long-time are more prone to this disorder than others. It can also affect the individual who have chronic immune disorder like heart problem, HIV or kidney disease.

This type of cancer begins its attack on merkel cells which is found on the epidermis (upper layer) of the skin. These cells are well connected to nerve endings and hence this disorder is called neuroendocrine carcinoma.

Who are at risk ?

People who are overly exposed to sunlight due to work atmosphere, weakened immunity system due to underlying infection and people with previous history of skin cancer are more prone to get MCC than others. As you progress towards old age, the risk of getting this problem also increases. Similarly people who are fair complexioned and those who are undergoing chemotherapy are also at risk.

Your doctor will do a skin biopsy to identify the stains of cancer causing cells in the skin.

Treatment depends on the intensity of the disease and the general health condition of the person concerned. Chemotherapy, surgery and radiation therapy are the best methods of treatment available.

During surgical process, the surgeon will remove the tumor (cancer causing cell) from the affected skin. He would also remove lymph nodes in case if the disease has progressed up to lymph nodes of the skin. He may use scalpel or by means of micrographic surgery for removing the tumor. Very often skin cancers that occur on the face are treated with Moh’s surgery.

During radiation method, the affected part of the skin is exposed to powerful beams of radiation that destroys the carcinogenic cells. The patient will be positioned in long table to facilitate maximum exposure to radiation therapy. Some doctors may combine radiation method after surgery for destroying cancer cells totally. This method is effective in controlling the spread of disease further.

Chemotherapy is also used for killing the tumor cells on the skin surface. The person can be given oral drugs or put on IV fluids during the process. Your doctor will decide the mode of therapy depending on your age and health condition. 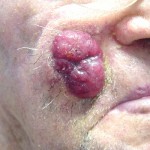 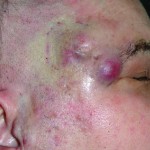 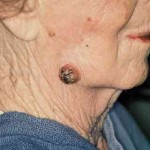 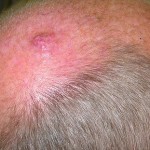 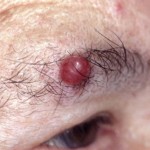 You need to avoid going out in hot sunlight. Apply sunscreen lotion liberally on exposed parts of the skin. You can also wear hat and cotton clothes and use goggles to protect your eyes.