MRSA is the short term for Methicillin Resistant Staph Aureus in which the Staphylococcus bacteria would become very powerful and resistant to several antibiotics. This type of bacteria is difficult to treat and it attacks and causes infections in various part of the body. Often MRSA infections occur in people who are in hospital for long and people who are undergoing dialysis often. It can also develop after invasive procedure like surgery or with intravenous tube for prolonged duration.

There are basically 2 types of MRSA infection. One is that which develops on ill patients who are in hospital or clinics for long-term which is called as HA-MRSA (health associated) and the other type is that spread across community. It is known as CA-MRSA (community associated) for which even healthy people become victim for staph bacteria. This type is contagious and can easily spread through skin contact.

The signs of MRSA are not the same for all individuals. Symptoms vary with respect to the part of the body that has been attacked by bacteria. Often skin is the most vulnerable part that is affected by MRSA. It causes painful blisters or sores on the skin. 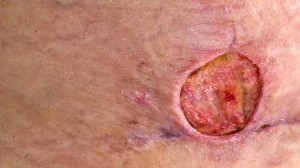 Initially it appears as tiny red lumps on the skin and gradually it progresses to painful boils or sores. The affected skin layer is warm to touch and is filled by pus or fluid like substance. Some people may develop fever and tiredness along with skin boils when infected with MRSA.

MRSA staph infection can infect the bloodstream also. In rare cases it can infect the urinary tract causing burning pain while passing urine and discomfort in the genitals while having sex.

If lungs are infected with MRSA it can be potentially dangerous causing symptoms like difficulty in breathing and choking. The patient has to be hospitalized immediately for timely treatment.

Surgical wounds can easily be infected by MRSA. It can become serious if not attended quickly and may require re-surgery also. Children can get easily infected with this bacterium due to weak immunity. If you see any skin problems like pimples or insect bites like blisters on the skin of your child, consult the doctor without any delay. 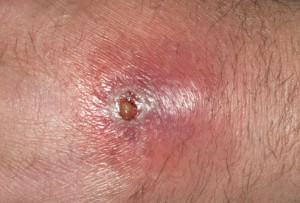 It is the Staphylococcus bacteria that cause MRSA infection. This bacterium is found in our skin under normal conditions and many people would have them on their nose.

Under favorable conditions they multiply in number infecting the skin or blood. It will not cause any problem in healthy individuals causing only minor skin infection. But people with weakened immunity or those suffering from chronic diseases can develop strong infection. It is said that about 2% of the population carries the staph bacteria all the time, as per the report given by CDCP (Center for disease control and prevention).

People who are in the habit of taking antibiotics for common cold and other minor problems are prone to get MRSA infection. There are individuals who use unnecessary antibiotics even for mild illness.

For years together antibiotics were wrongly prescribed for colds and flu for which they do not respond. Gradually germs learn to survive the treatment even when strong antibiotics are prescribed. And the bacteria become resistant to antibiotics moving more deeply into the internal organs. Staph bacteria that enter the body through cuts or wounds can cause serious problem infecting the bloodstream.

Staph bacteria can easily spread by skin contact. This can happen when you handshake with other person who carries the bacteria in his skin.

You have the chance of getting infected with MRSA by touching the objects on which they survive. People who carry MRSA can transfer the bacteria to the objects they use like cups, clothing etc. 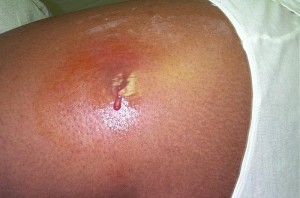 People who are in the hospital or clinic for long duration are at risk of developing MRSA infection.

Individuals who have undergone surgery and those with open wounds are at high risk.

People who are put on IV (intravenous fluids) for prolonged time and those using catheters for long duration are likely to develop this infection.

Community associated MRSA is common in sports personalities and athletes who have frequent skin-to-skin contact. Children in daycare centers are at risk of developing MRSA except few exceptions with having strong immunity.

Approximately one out of every 4 healthy people is carriers of Staph bacteria but that does not cause any problem.

Homosexual men are at high risk of getting infections of MRSA.

Based on the symptoms like skin blisters your doctor may complete the physical exam. He may request for biopsy of tissue sample to test in the laboratory.

First line therapy for treating MRSA infection is by strong antibiotics that are sensitive to MRSA. In severe cases, the doctor may drain off the abscess on the skin first before prescribing antibiotics. But before that, he has to verify if particular type of Staph is not resistant to specific antibiotic.

The affected person should continue to take antibiotics prescribed by the doctor without stopping the course of drugs. There is every chance for the bacteria to survive if the medications are stopped abruptly. Some of the antibiotics prescribed for MRSA include rifampin, linezolid, Septra DS, sulfamethoxazole trimethoprim and sulfatrim etc. In addition, topical creams can be applied on the infected skin. Dosage and brand of antibiotics differ with each patient and according to the severity of the symptoms. For in-patients, intravenous lines are removed and drugs are given orally to reduce the risk of infection. Some severe cases can become fatal with MRSA infection if it has progressed to lungs or bloodstream and the patient is with weak immunity. 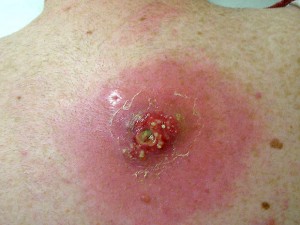 Parents should not send their children to daycare center if they suspect MRSA infection. Daycare workers should not make direct skin contact with such children. Practicing hand-hygiene is absolutely necessary to prevent further transmission of bacteria. They can use disposable gloves and use antiseptic solutions for washing hands. It is good to cover the wounds or cuts in the skin with dry bandages and allow them to heal quickly. Avoid sharing items and clothing if you are tested with MRSA positive. Athletes can take a shower after completing each game.