Blocked nose is one of the common challenges during infancy and childhood. It can be due to allergy or infection or enlargement of adenoid glands. Stuffy nose occurs not due to the formation of thickened mucus but due to the inflammation/swelling of lining of nasal membranes. The blood vessels of the nasal lining get inflamed due to infection or allergy and block the passage of mucus. This causes nasal congestion.

Nose is equipped with two openings called nostrils and a septum lying between them. Number of small pockets is present inside your face known as sinus cavities. Nose is responsible not only for smelling but it also does the function of tasting and breathing. Nose contains plenty of small hairs which act as a defense system purifying the air that we inhale. As the air passes through the nose, it enters the olfactory system which in turn sends signals to the brain to identify the smell and taste.

Air contains plenty of dust, pollens, spores, chemical fumes, pollutants and germs. Nose actually filters the air before sending it to the lungs. Impurities are expelled by the body in the form of sneezing and coughing. In case the impure air accidentally enters the lungs the body’s immune system releases “histamine” which increases blood flow to the nasal tissues. Because of swelling normal mucus flow is interrupted causing nasal congestion. Nasal blockage is a symptom and is not a disease. However babies can get affected largely due to nasal congestion. It can cause breathing difficulties and reduced feeding. 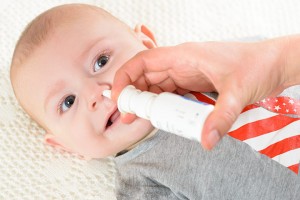 The child or infant having nasal congestion would have difficulty in breathing. He may not be able to feed well. He may breathe noisily. He may not be able to cry loudly if his voice his affected. It can cause nasal discharge (clear or thick). The baby may cough occasionally (if the cold is mild) and repeatedly (if the infection is severe). He may not be comfortable and can show irritant behavior. He may not get quality sleep which makes him tired. Keeping him in upright position can improve breathing and the symptoms get worse when lying down. Other symptoms of nasal blockage include coughing, wheezing and watery eyes.

Some of the Nasal Congestion causes are explained here in detail :

Dry Air – If the air contains low water vapor molecules and if there is low relative humidity level, this condition is described as dry air. Dry air can cause problems in newborns since they have tiny nasal passage depleting the nasal secretion leading to noisy breathing and nasal congestion.

Irritants – Many things like dust, smoke and wind come under this category. Sometimes even milk can enter the nostrils of the infant causing nasal blockage. The baby would start breathing noisily and indulge in sneezing. It can cause clear nasal discharge.

Cold – Common cold is the major cause of nasal blockage in babies. The immune system of infants is weak and susceptible to infection. Colds can be contacted easily from other members of the family and from day care centers.

Allergies – Allergy caused by dust and pollen can cause block in nostrils. Hay fever and grass fever occur due to allergies. Allergic rhinitis occurs commonly in spring and also in summer months on exposure to mould and house dust.

Birth Defects – Some babies are born with cleft palate or deviated septum can cause nasal blockage. In severe cases surgical repair is necessary to prevent frequent nasal congestion and to overcome feeding difficulty.

Enlarged Adenoids – Adenoids are pair of tissues present near the entrance point of nasal passage. Adenoids cannot be seen like tonsils since they are found behind the nose. Both tonsils and adenoids are responsible for fighting infections by filtering the micro-organisms. Adenoid tissue grows large in size between 0-4 years and subsequently gets back to normal size. But some babies have inherent defects with large adenoids which have to be corrected surgically. Enlarged adenoids can interrupt normal mucus flow and block the passage completely. In rare cases babies can put small objects like beads, foam rubber and tiny toys into the mouth or even nose causing nasal block. Using nasal sprays more frequently can cause swelling of nasal membranes blocking the passage.

No separate tests are needed to detect nasal congestion. Your doctor would examine the child closely paying more attention to nasal area. 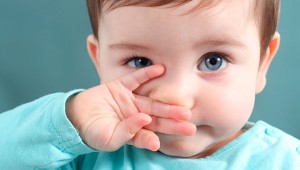 Mild form of nasal congestion would clear on its own without wanting any medication or treatment. Body’s immune system would swing into action to release necessary chemicals to fight off the infection/cold and clearing the nasal blockage. If the symptoms are moderate or severe you need to consult your doctor without delay. He/she would identify the root cause of nasal blockage before attempting to treat it.