Melanocytes are pigment cells that produce a special pigment called melanin. Melanin is responsible for deciding the skin color which is found in the underneath layer of epidermis. Melanoma is the term given for cancer that develops on the melanocytes. Nodular melanoma appears on the skin in the form of large sized mole. It occurs largely on fair complexioned people and is a type of skin cancer. It is difficult to detect and diagnose nodular melanoma since it resembles a mole causing no symptoms. Melanoma is characterized with irregular borders, change in color and growing size of lumps. In some cases, nodular melanoma spreads to nearby parts and lymph nodes causing complications. Treatment for nodular melanoma is surgical excision of affected skin area.

If any of you could find any changes in skin color or any suspicious spots on your skin, it should be consulted with your doctor without delay. Your doctor would observe it and if necessary do a biopsy to check whether it is melanoma/skin cancer or not. Nodular melanoma is a potentially serious skin cancer and if diagnosed early, can be cured. It can progress deep inside your skin affecting vital organs and nearby lymph nodes. Over weeks, the lesion which you observed as small mole can grow into large sized lump rapidly spreading inside the nodes. Hence it is better to prevent skin cancer than to treat it. 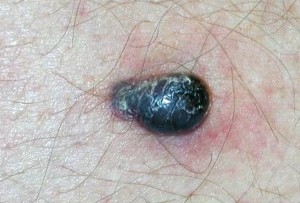 Nodular melanoma appears in the form of suspicious spots on the skin. It can occur anywhere in the body but largely found in the neck portion. Often the spots do not change into cancer-causing cells (malignant) but if they change in color or grow in size it can be malignant. You need to know about the ABCD rule when diagnosing melanoma. ABCD is the short form of Asymmetric, without any defined Border, Color change and growing Diameter size.

If you are drawing imaginary line through the middle of spot or mole, you will not get 2 equal halves, which is known as asymmetric in nature. If the moles are cancerous, it will not have a defined shape.

Melanoma of any type will not have a defined border. Normally moles have a clear border but melanoma borders are uneven and irregular.

Melanoma can be distinguished by moles easily. Normal moles will be often black or brownish in color. In the case of melanoma the color would be changing or have mix of colors. Moles that have different range of colors in them are malignant. In some cases the color would be changing from black to brown or red and sometimes you can find even white color. This type of color changing is a clear sign of malignancy.

Normal moles are smaller in size and they do not grow. But melanomas grow in size and it measures roughly 6mm in diameter or even more. It may look smaller when you first noticed it but gradually over weeks it grows in size.

Melanoma.org (Melanoma Research Foundation) has added a new letter “E” meaning evolving. Unlike benign moles, melanomas are evolving (changing in nature). Anything that changes in color, shape, size and border are definitely a matter of concern. You should be alert while examining your body from head to toe if you see any new development of moles which are evolving in nature.

Other symptoms of nodular melanoma include shiny bumps, dark colored lesions, and lumps that do not heal. Any changes in existing moles can be cancerous. Moles that are bigger than pencil eraser in size can be melanoma. Melanoma can occur anywhere but often it can be seen on the chest, back, hands and soles. In rare cases it can occur in your mouth or even anus.

When the pigment cells called melanocytes undergo repeated fusion it becomes malignant and is found on the basal layer of the epidermis. Series of changes can happen in the DNA molecules causing melanoma. Repeated sun exposure and increasing number of moles can cause skin cancer of any type.

It is wise to do self-body examination once in a month if you are above 45 years or if you are a person with large number of moles. If you have any doubts about the increasing size of a mole or changing and evolving mole you need to consult your doctor promptly. Your dermatologist or doctor would clearly examine the body and may order for biopsy. A small tissue sample of the mole is taken and tested in the laboratory to detect presence of cancerous cells. Microscopic test is done to detect Clark level of invasion and also to find Breslow thickness. Some doctors use mitotic rate to check how fast the malignant cells are growing. Some of the tests used for diagnosing nodular melanoma are dermoscopy to identify melanocytic naevi and pigmented carcinoma cells. 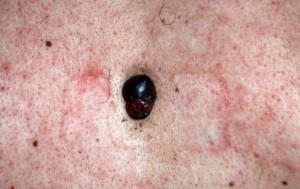 The method of treatment of nodular melanoma differs on factors like your age, size, color and shape of the mole or lumps and how far the melanocytes have proliferated. Surgical excision is the first line treatment for nodular melanoma. The area in and around the skin where lumps are located are surgically removed. It can be done at the doctor’s office under local anesthesia.

In case the malignant cells have spread deep inside the skin and invaded the nearby lymph nodes then it has be removed completely by surgery. Chemotherapy and other radiation methods are not usually considered for melanoma. However in some cases it has to be supplemented if required. Medications are prescribed in the form of injection or oral pills.