Any excess of fluid draining from the ear is known as otorrhea. It is not usual to experience ear discharge frequently. Several factors can cause ear discharge in individuals. It can be due to ear infection, any problem in the ear canal or middle car. Symptoms of otorrhea include, oozing out of fluid from the ear(s) with foul smell, pain or discomfort in the ear and feeling of ear pressure. Treatment for otorrhea depends on the root cause. Often antibiotics are prescribed in the drops for clearing off any bacterial infection.

Ear infection is the main cause for ear discharge. People frequently coming in contact with water are prone to ear infection. Swimmer’s ear is one such case. Middle ear can develop swelling causing ear discharge in some people. This condition occurs commonly in children causing thick mucus discharge from the ears. If treatment is not given in the right time, it can cause rupturing of eardrum resulting in partial or permanent loss of hearing.

For some children and adults, outer ear infection can cause pus like discharge from the ear. This condition is called as otitis externa. Here infection occurs in the external segment of the ear causing inflammation and pus like drainage. Excess of water inside the ear and weather condition and swimmer’s ear can cause this problem. Thick pus yellow or greenish in color can come out of the affected ear in such cases.

Putting small objects into the ear can cause otorrhea and ear discharge. Many people use pointed objects like pen, safety pin etc for clearing off the mucus from the ear. This can affect the ear canal causing ear discharge. Pulling the wax like substance using sharp objects can lead to inflammation and pain of ear inviting more complications.

Eardrum perforation in the middle or internal ear can cause ear pain with discharge. A strong blow on the ear or severe injury to the head can cause ear discharge. Sometimes soft tissue damage in the internal ear can be the cause. Severe cold and headache can affect the pressure of the ears causing ear pain and discharge. In rare cases brain injury can trigger ear discharge which of course is accompanied with several serious symptoms. Cerebrospinal fluid can get discharged from the ear in case of brain injury. 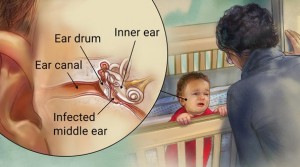 Otorrhea can cause symptoms like ear discharge, vertigo or lightheadedness in the affected person. It can cause considerable ear pain with discomfort. In severe cases it can result in partial loss of hearing or feeling of stuffed up ear. Ear pressure can increase due to infection and ear inflammation causing vertigo and ear discharge. For some people, along with ears nose would also get affected due to inflammation causing breathing difficulty.

No separate tests are needed to detect otorrhea. Any doctor simply looking into the ear can find out ear discharge. Ear specialist would use a special device for examining the ear using lighted instrument for identifying the cause. In case of ear infection the discharge is accompanied with foul smell. Otorreha if accompanied with severe symptoms like confusion, loss of orientation and mental imbalance should be consulted with neurologist without any delay.

Otorrhea is of two types. 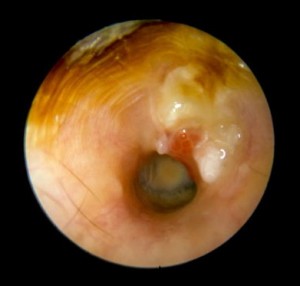 Treatment for otorrhea is given in the form of topical antibiotics. Antibiotic drops are prescribed which has to be applied 2-3 times a day. One has to bend his/her head sideways, while applying the drops. In case of severe ear infection oral antibiotics are also suggested along with topical ones. Care should be taken while washing the face so that any water particles do not get into the affected ear. Swimming should be avoided until the infection clears off completely. Your doctor would use a special kind of suction pump to drain off the fluid from the ear so that he can look into the ear clearly to identify the cause of ear discharge.

For CSF otorrhea several tests including imaging tests are done to find out the cause and extent of brain injury. In case of meningitis, strong dose of antibiotics are prescribed. Trans canal drain is done for removing excess of CSF fluid from the ears. For people with repeated ear infection, placing a device inside the ear is considered, so that fluid gets drained easily. If a person has recurrent ear infection that lasts more than 2 weeks, it is considered to be chronic. Any foreign objects present inside the ear should be removed surgically.