Ovarian cyst is tiny fluid filled sacs that develop inside the ovaries. Women will have two ovaries roughly resembling the shape of almonds found on each side of the uterus. Eggs are formed in the ovaries and are released during monthly menstruation cycles. It is quite common to have ovarian cyst for many women. Most of them will not require any treatment and will vanish within few months. But some of them may cause problem if it ruptures inside the ovary.

Ovarian cysts do not show any signs and generally disappear on their own. However if the cyst is bigger in size it can cause pain and discomfort. It may produce symptoms of frequent urination since it pushes the bladder with force. Sometimes cyst in the ovary can cause irregularities in the monthly period, pelvic pain and pain during intercourse.

It produces exactly same pain as one gets during menstrual cycle. There will be dull throbbing pain in the lower abdomen which may spread till your thighs and lower back region. For some women it can cause trouble in bowel movements and bloated sensation in the abdomen. When the cyst gets ruptured inside the ovaries it can cause pelvic pain.

Functional cysts develop in the ovaries each month and they are known as follicles. These follicles will produce estrogen as well as progesterone hormones and releases the egg during ovulation. If the size of the follicle keeps growing then it becomes a functional cyst.

Sometimes follicular cyst will not release the egg for fertilization and it grows bigger in size forming a cyst. There exists another type of cyst called corpus lutem cyst in which the follicle will close off its opening to prevent escape of egg and builds up liquid mass inside the follicle. This will eventually change the shape of corpus lutem which will turn into a cyst. Women who are using fertility drugs like Clomid or serophene have increased chances for developing corpus lutem cysts.

Both the functional cysts and corpus lutem cyst are harmless and will not prevent pregnancy and will not cause pain. Dermoid cyst is normally produced during the process of ovulation each month. These cysts will contain tissues of hair and skin which are used for fertilization of eggs. Cystadenomas are another type of cysts that are filled with liquid like mucus material and they develop from the ovarian tissue. Dermoid cyst may sometimes grow very large pushing the ovary from its original position causing ovarian torsion. In case the endometrial cells of the ovary grow outside the uterus it is called endometriomas cyst.

Ovarian cyst generally will not produce any complication. But if the cyst mass develops after menopause stage then it can become malignant. Hence it is necessary to do routine pelvic examination for every woman who has crossed middle age. In rare cases, ovarian cysts will grow enormous in size to push the ovary from its usual position causing pain and discomfort. Similarly a cyst that burst inside the ovary can cause severe pain or internal bleeding.

Ovarian cyst is diagnosed during routine pelvic examination and not through symptoms. Ultrasound scanning is done for detecting the presence of cyst inside the ovaries. It is the best method available for finding ovarian cysts. Ultra sound produces sound waves and vibration which will show the images of cysts present within the ovary. 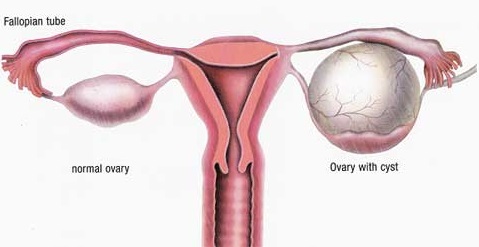 How Will Your Doctor Find Out If The Ovarian Cyst Is Dangerous or Not?

For taking a decision about the complications of ovarian cyst the doctor will consider the age of the women. Very often, women who are 40 years and below 40 years will develop regular functional cysts during their ovulation cycle. These cysts will not create any problem and will be shed off in the next menstrual cycle. No testing is necessary for those women and the doctor will just watch their pelvic region for few monthly cycles.

Taking oral contraceptives is very helpful in preventing ovarian cancer. Hence common functional cysts will not generally develop in these women. It is enough to conduct routine pelvic examination for these women without any other special procedures. Functional cyst will be rarely present in women who have reached menopause. Though ultrasound scan an expert doctor can diagnose the nature of cyst and its importance. In case more serious type of cysts with larger size is found in the ovaries then your doctor may ask for CA 125 blood test to rule out ovarian cancer. If the results of CA 125 blood test show high or elevated levels of particular protein in blood then it can be due to ovarian cancer.

But some underlying medical issues like liver disease, pelvic infection and uterine fibroids will show elevated levels in the CA 125 test. Hence the doctor will have to consider several factors before taking the decision. She will analyze the size of the cyst, its contents, and if necessary perform pelvic ultrasound and laparoscopy test before concluding her diagnoses.

Treatment for ovarian cyst depends on the age and symptoms of the affected women. For many women of age group 30-40 years your doctor will wait for some months and monitor the pelvic region to find if the cyst has disappeared. She may ask you to take oral contraceptive pills to prevent the formation of new cyst and restrict the growth of existing ones.

In severe cases, surgery is done for removing large cysts that creates pain and discomfort. Cystectomy is the procedure of removing the ovarian cyst without removing the ovary. However if she suspects cancerous growth on the cyst then she will do a hysterectomy to remove both the ovaries along with the cysts. Women who develop ovarian cyst after menopause are likely to develop cancer. Sometimes ovarian cysts are found during pregnancy but most of them are benign (harmless). But it will be removed surgically if it poses danger of rupturing inside or cause twisting of ovaries which can affect the growth of the fetus.

You can do nothing to prevent getting ovarian cysts. But it is advised to do routine pelvic examination to monitor any changes in the ovaries. You should watch for any changes in the monthly cycle and any other symptoms and discuss with your doctor to avoid any complications.