Parkinson’s disease is one of the common forms of nerve disorders involving movement of joints and ligaments. The affected person will progressively lose control of muscles which in turn causes tingling fingers and trembling of toes. In addition, there may be stiffness in joints and reduced movement making it difficult to walk or even talk.

Our brain has two regions called corpus striatum and substantia nigra. Both of them are responsible for making flexible movements in controlled manner. A fluid like discharge called dopamine is secreted in this area and when there is reduction of dopamine or complete loss of dopamine secretion in the brain, Parkinson’s syndrome occurs. When there is lowered dopamine secretion, it affects the communication between the two regions causing impairment of movement. Eventually other cells present in the brain begin to degenerate worsening the problem.

However what exactly causes reduction of dopamine and cell degeneration is not understood. Inflammation in the brain and increased stress may cause cell damage to some extent. It is believed that genetic and environmental factors together contribute for Parkinson’s disease.

Studies report that men are more affected than women with this disorder. Elderly people are more prone to this disease than adults. Individuals with family history of this disease have increased risk of getting this syndrome. People who are prey to head injury, stress or prolonged exposure to toxins are under the risk of developing this disease.

Some of the important signs of this disease includes rigidity of limbs and trunk, tremors (tingling of fingers, hands, feet and legs), slowness in movement, postural instability (which makes one difficult to accommodate certain position and posture) and Parkinson’s gait.

Your doctor would look for the above symptoms and check for rigidity of muscles. Very often, symptoms begin to appear on one side of the body. 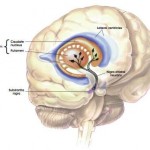 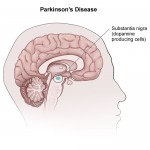 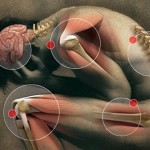 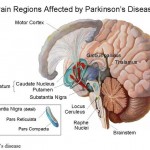 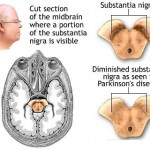 Treatment can be given only to reduce the intensity of symptoms and to increase the dopamine secretion in the brain. The treatment becomes very effective, if the person goes to the hospital on early stages during the onset of motor symptoms. Any type of therapy given aims in replacing dopamine and increase the longevity of its secretion.

Levodopa is the best therapy given for Parkinson’s disease. It is usually given in combination with Sinemet for increasing the dopamine secretion. But this may produce some adverse effects like painful cramps, reduced response etc. Lower doses of levodopa are administered for getting the best possible outcomes and to reduce side effects.

If detected at early stages, monoamine oxidase Type B is given which will mimic the functions of dopamine thus providing good relief from the motor symptoms. However this has some side effects like drowsiness, constipation, edema, and nausea.

In severe case of disorder, surgery is the only option. During the process, the surgeon will implant the electrodes in the deep brain stimulation method for managing the symptoms. Stem cell therapy is done for some patients during the process the stem cells that produces dopamine are inserted to produce best positive results.

Apart from medications and surgery, exercise should be done regularly for getting increased physical activity. Speech therapy can be given for patients who have difficulty in talking.