Pilar cyst and epidermoid cyst are red painful blisters found on the scalp. It is also called as sebaceous cyst since it contains sebum (an enzyme secreted by sebaceous gland). The cysts are filled with contents similar to cottage cheese looking very much like toothpaste. More than 90% of pilar cyst occurs on the scalp. It is known by the name of trichilemmal cyst which is harmless and benign.

The pilar cyst is closed sac like structure developing on the scalp. If it develops on the subcutaneous layer of the scalp it is called intradermal cyst (only on 5-10%) and very often it occurs on the cutaneous layer. These cysts can be sporadic and are inherited from parents.

In rare cases the pilar cyst contains single or group of proliferating cells that can turn into tumors (2%). This type of cyst grows in size and extends up to 25cm in diameter that causes ulcer like growth. Though they are harmless still it can be aggressive and recur again after it heals. Basically pilar cyst contains a lining and the contents. The lining looks very much like the outermost layer (epidermis) of the skin and looks like roots of hairs. The contents of the cyst include cheese like material made of keratin. Pilar cyst is more common in women than men. It develops on middle aged and old aged people.

Pilar cysts are mostly skin colored and are round/oval shaped bumps lying under the skin. Most of them occur as single nodule and sometimes it occur as group of lesions. There will not be any punctum on the cyst. It looks like inflamed growth of the skin red in color. The lining of the cyst will fuse with the epidermal layer to form a crypt which will discharge and ooze out contents until it finally resolves. Pilar cysts are red colored sores emitting foul smelling pus. It looks embarrassing for the person. Sometimes it contain dark plug in the center though which it discharges the contents inside.

Exact cause of pilar cyst is unknown. It is believed to be hereditary indicating the autosomal dominant genes. Various attempts are made for mapping the gene but till now no concrete evidence has been established.

Your doctor will examine the cyst on the scalp and order for CT scan to differentiate it from meninges. A small portion of the cyst is taken and tested on the laboratory for confirming the diagnoses and for ruling out presence of cancer causing cells.

It can be safely removed through excision by giving local anesthesia on the affected part. But new cysts can develop on the same place in future and it will leave a scar on the site. Pilar cyst can be left to resolve on its own if it is not seen by others and if it does not interfere with routine activities.

A small incision is made on the affected area of the scalp. Sometimes a circular punch incision is made for removing the cysts. Your doctor will first apply local anesthesia on the head. He will make a small incision at the center of the cyst using biopsy tool. Very often, the fibrous capsules of the pilar cysts are so thick that it can be removed along with the cyst without having to drain out the contents. In case the contents inside are like fluid then he will express the contents from the cyst and using curette he will gently press the cyst against the wall to dislodge it from the scalp. Next he would use forceps to separate the cyst wall by making blunt dissection. Necessary sutures are made after dressing the wound.

In case the cysts has been infected then you have to wait for the infection to cure for the removal of the cyst, because removing it with infection is likely to give room for recurring cysts in the surrounding places. During surgery it is important to remove the entire lining and contents so that the cyst cannot grow back. 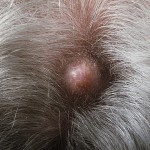 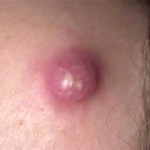 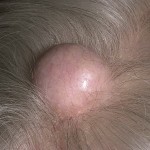 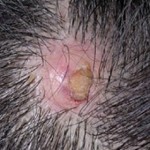 Why You Should Remove ?

Apart from looking ugly on the head, the pilar cyst has a chance for rupturing when you comb the hair which spreads the infection. It should be removed for the cosmetic reason. When it gets infected it becomes itchy and irritating.