Pyoderma gangrenosum is a condition that causes large bumps or ulcers on the legs. The painful sores can develop anywhere on the skin but it largely occurs on the legs. It is believed to be caused by abnormal immune system where the body’s own immunity will destroy and damage the skin surface causing blisters. People with preexisting chronic disorders like rheumatoid arthritis or inflammatory bowel disease are more likely to develop this disorder. Painful ulcers can be controlled using powerful medications and by using anti-suppressing agents. However it is a rare disorder affecting only few people.

Pyoderma gangrenosum is marked by the formation of painful sores or blisters on the skin. The bumps are red in color with the shape of spider bite. Within few days the bumps will grow in size forming large blisters. Very often it develops on the legs. For some people several small ulcers will unite to form large blister causing chronic pain.

Exact cause of pyoderma gangrenosum is not known. It can be an autoimmune disorder in which the body’s own immune system will produce antibodies for attacking the skin causing blisters.

Your doctor will look into the bumps on the legs to identify pyoderma gangrenosum. He would request for blood sample to rule out any infectious diseases on the liver or kidney. He would do a biopsy to remove a small tissue from the bumps to test it on the lab. 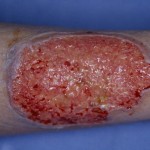 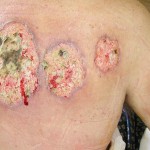 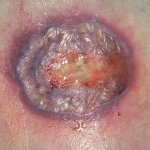 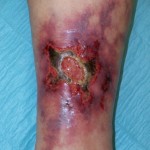 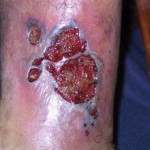 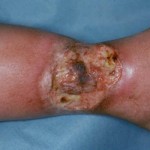 Often it takes time for the lesions to heal completely. Two possibilities are there for managing the symptoms. One is to suppress the immune system and the second is to heal the blister directly through medications. Corticosteroid like prednisone is given for managing chronic pain from lesions. It can cause adverse effect and hence you should follow the instructions of your doctor in dosage. After few months your doctor would give cyclosporine or any other relevant drug to reduce the corticosteroid dosage.

Topical creams that contain sulfadiazine can improve healing process. Anti-inflammatory drugs like dapsone give quick relief. For some people compression bandage is done on the legs to reduce the pain. Immuno-suppressant drugs like tacrolimus cream are prescribed to control the immune system if that are the culprit causing blisters and bumps on the skin. Surgery will be done for treating chronic pain arising from large ulcerous blisters. Skin grafting is another method in which piece of artificial skin is grafted to the affected area after completely removing the ulcers.

You can do nothing to prevent pyoderma gangrenosum since exact cause of this skin disease is not known. Avoid cuts, injury on the skin since it can trigger formation of new ulcers.