You are here: Home / Information / Rabies

Rabies is a deadly viral infection that spreads through the saliva of animals that are infected. When the infected animal bites a person the virus gets directly into the bloodstream of him/her. There is every chance of receiving the infection if the saliva of the animal gets in contact with any open wound of humans. In the Asian countries, rabies is spread through stray dogs and in the USA it gets transmitted to humans via animals like bats, raccoons and foxes.

Rabies virus is the main cause of rabies infection. The virus would easily enter into the animal’s body to cause infection. Once the infected animal bites any person the virus gains entry into his body. The virus can also enter through human skin when the saliva of infected animal touches any open wound, skin burns, mouth or even through eyes. This can easily happen if the infected animal licks the man on the spot like cuts or injury on the skin. Rabies can spread to humans through mammals like dogs, cats, cows, goats and horses and the list also includes bats, monkeys, foxes, raccoons and skunks.

How The Virus Causes Death ?

Virus would remain in the site of exposure (skin cut or injury) till the incubation period. After this, the virus would enter the brain through the peripheral nervous system. From the brain it gets deposited to almost all parts of the body. 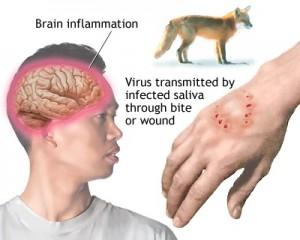 People who are in close contact with domestic animals (that are not vaccinated) are at high risk of developing rabies. People who frequently travel to rabies prone areas like African and Southeast Asian countries are prone to get rabies.

People who handle animals frequently like veterinary doctors, helpers and those involved in handling animal hides etc have high risk. If an individual has wounds in his neck or head, rabies virus can travel fast to affect the brain.

An individual bitten by virus infected animal can develop first symptom within a week. Initially it would cause flu like symptoms that include fever, headache, body pain and weakness. You would not suspect rabies infection since the symptoms are similar to flu. Rabies can attack humans in two possible ways. One is by attacking the muscular system. It would paralyze the muscle slowly starting at the point of bite and proceeding towards the entire muscles. Subsequently the person would develop coma and death.

Second kind of rabies (this is the most common type) would produce typical symptoms of rabies infection. The affected person would develop restlessness, anxiety, over-sensitivity, confusion, encephalitis (leading to development of strange thoughts and feelings), increased saliva production and fear of water. He may also develop difficulty in swallowing leading to dehydration. If the signs are severe, it would cause death. If you are not sure about bitten by animals, but still have the above symptoms, you need to seek prompt medical care.

No special test is available for detecting rabies virus. If you have some of the above signs and had been to animal exposure recently, your doctor would assume that you have received the virus and start the treatment soon.

Often, rabies infection is fatal, though few numbers of cases has survived. The only way to protect your health is to receive injection to prevent further infection. In case you know that you have been bitten by infected animal then you need to take prompt treatment in the form of series of injection. Prophylaxis is the first line treatment for rabies bite.

Rabies immune globulin injection is given to prevent the infection. Your doctor will give you a shot near the site where the animal has bitten you to kill the virus. This is followed by series of shots so that your body develops immunity to fight against the virus. A course of 4 injections is given for rabies infection over a period of 14 days. Second approach for treating rabies, is to find out if the animal has been infected. For instance if you have been bitten by domestic animals you can observe the signs of rabies infection.

Often rabies infection is fatal as soon as the symptoms start to appear.

You can prevent rabies infection by taking good care of your pets. Vaccinate your pets regularly and take steps to prevent the entry of bats into your home. You can also get a shot of rabies vaccine if you are planning to travel to a place where rabies infection is common.