You are here: Home / Information / Ridges on Fingernails

Ridges are present on the fingernails either in vertical position or horizontal. It is one of the nail abnormalities that occur due to old-age. In medical terms it is called “Onychorrhexis” which is marked by long lines running vertically on the nails. Aging is one of the important factors that cause ridges on fingernails but it may also occur due to prolonged intake of medications. Ridges are nothing but parallel lines running from the bottom of the finger to the tip or from one side to other. However presence of vertical ridges is not a symptom of any serious issue. Very often, these ridges follow specific pattern. Some people confuse Beau’s lines with ridges which is caused by infection or malnutrition.

Old-age is the main reason for the formation of ridges on fingernails. It can also occur due to reduced metabolism, shortage of minerals and certain vital nutrients. Sometimes, ridges are caused due to mal-absorption of nutrients indicating that your nails are not strong. Presence of ridges on fingernails is indicative of poor absorption of nutrients in the body and you can resolve this problem by visiting your doctor.

If the nails are subjected to injury or trauma it can cause ridges.

If the body lacks moisture, then it is indicated in the form of ridges. Living in hot climatic zone can be the cause of dryness which may result in ridges on nails. If you find any sudden changes in nail structure and color it can be due to cardiovascular or circulatory problem. Deficiency of vitamin A can cause nail ridges.

Long lines run vertically on the fingernails forming ridges and can be seen by close examination of the nails.

Treatment for ridges on fingernails depends on the causative factor. If there are ridges due to lack of moisture, you need to drink plenty of water. For curing dryness, you can massage the nails and apply moisturizing cream on it every day. If the underlying cause is respiratory problem your doctor will take necessary tests for monitoring your heart and lung functions. Nails can change in color and become bluish green if there is heart problem or due to presence of toxic substances like arsenic in blood. It can also change color due to psoriasis and hence treatment lies in identifying the real cause.

Very often, taking nutritious food will improve the condition and reduce the ridges formed on fingernails. In case the ridges are running horizontally, then it can be due to serious health issue of your body. Increasing the intake of vitamins and protein can help you to overcome the vertical ridges on fingernails.

Pictures of Ridges on Fingernails :

Images, Pics, Pictures and Photos of Ridges on Fingernails 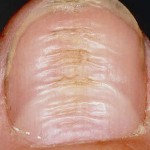 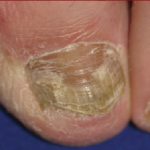 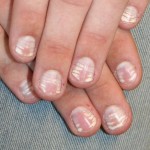 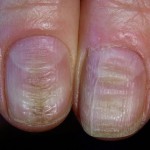 Regularly massage the nails with moisturizing lotion or oil to prevent dryness. Drink plenty of water to keep your body well hydrated. You can also try using nail ridge fillers to keep your nails smooth and soft.