Rocky Mountain fever is caused by Rickettsia rickettsii bacterium which is carried by tick. This disease was widespread in North and South America affecting many people. It damages the cells present in the lining of blood vessels causing leakage of blood. This becomes very serious when internal organs like kidneys are damaged. This fever can be cured completely by prompt treatment but it can become fatal if it gets complicated causing death.

Initial symptoms of Rocky Mountain spotted fever begin within 2 days of getting bitten by tick. Many people don’t even remember getting bitten by tick at some point in their body. It begins as sudden high fever, headache which is followed by skin rash. More than 90% of affected people will develop skin rash with fever. Some people may feel nauseated and drowsy after few days. For some people it can cause abdominal pain (very severe) which is often misinterpreted for appendicitis. In rare cases eyes may become reddish due to conjunctivitis.

However not all the symptoms given above are seen in all the people infected with RMSF The intensity of signs varies from person to person. Since the symptoms are often confusing for other fever RMSF may not be diagnosed properly. Some people may have severe symptoms requiring hospitalization on intensive care. Distinctive ashes are seen as small pink colored papules on the wrists and forearms which would eventually spread till the trunk. These rashes will not cause itching unlike normal rashes. Rashes begin to appear within 3-5 days of getting infected. One should not delay the treatment after the development of rash.

The bacterium Rickettsia rickettsii causes infection on the endothelial cell lining of the blood vessel thus damaging them. The process of damaging the blood vessel is known as “Vasculitis” and internal bleeding may occur in any vital organ like heart or brain. It may cause loss of circulation to the hands and legs thus causing severe damage. On account of this, some people may suffer from severe long-term damage due to vascular damage. It may take several weeks or even months to recover fully.

When the blood vessels starts leaking inside it can affect your brain causing seizures. It can damage your lungs or heart causing lung failure/cardiac arrest. It can damage the normal functions of your kidneys causing renal failure/death. In rare cases if the blood circulation gets interrupted in the fingers/toes it may cause gangrene (death of tissue) leading to amputation of fingers/toes. The symptoms may progress rapidly and can become life threatening for some people. So it is necessary to see your doctor if you have fever with rash.

RMSF is caused by bacterium Rickettsia rickettsii which is carried by a tick. When the ticks bite you subsequently it attaches with your skin to suck your blood thus transferring the bacterium to your bloodstream. This fever is caused primarily due to tick bites more particularly during warm weather.

This disease is common in North and South American states. People who spend more time on garden, particularly on grassy areas without wearing long sleeves are exposed to tick bites. If you happen to live in an area which is more prone to RMSF than other regions you are likely to catch this infection.

RMSF is difficult to be diagnosed by your health care provider since most of the early symptoms are common for other diseases. Based on your symptoms, your doctor may order for complete blood profile and biopsy of the skin (rash specimen). He would inspect your body for identifying tick bite to begin early treatment. In most of the cases, your doctor will put you on antibiotics even before the test results are ready to avoid any complication.

It is very much necessary to take antibiotics within 5 days of getting infected with bacterium. Doxycycline is an effective drug given for RMSF for children and adults. Treating the patients with other drugs can cause complication. Doxycycline is considered to be the first line drug to prevent death and should be given within few days of symptoms. This drug can be given based on clinical suspicion itself not waiting for the outcome of the results.

Fever will reduce considerably after taking doxycycline. The treatment should be continued for 2 weeks or even more as per your doctor’s advice. If the symptoms do not improve with this drug then it might not be RMSF. For severe cases the patient should be hospitalized to prevent damage of internal organs. 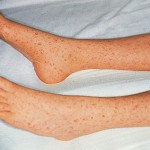 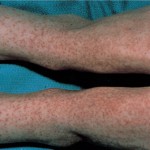 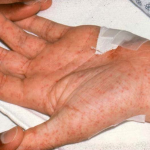 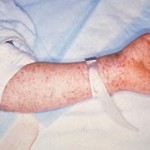 In case you are living in tick prone area, it is better to avoid going to grassy areas for long time. Wearing long pants/sleeves would prevent tick bites. Consider using DEET or any other good insect repellents. Clean the garden thoroughly so that ticks may not live there.