Sacroiliac joint is found in the lower spine region between the right and left iliac bones. The sacrum is located in this region which is triangular in shape and is made up of totally five vertebrae which do not make any movement. Rest of the bones in the spine is capable of making movement. Two iliac bones constitute the pelvic region and hence the sacroiliac joints are the joint that connects the spine with the pelvis. The sacrum together with the iliac bones is fused by strong ligaments which make only minimal movements.

At the maximum the sacroiliac joint will make 4 degrees of rotation in the joint portion. These movements occur in the hips region or in the lumbar spine. The entire weight of your torso is supported by sacroiliac joint and hence they undergo huge stress making it prone to wear and tear. Sacroiliac joint dysfunction is called by different names like SI joint syndrome, SI joint inflammation and SI joint strain. The nomenclature is obtained from the causative factor that is responsible for joint dysfunction and pain.

Like many other joints in the body, the sacroiliac joint is made up of several ligaments and cartilages which act as a cushion. Due to stress and wear and tear the cartilage gets damaged and become torn. This would eventually cause the bone to rub against one another causing osteoarthritis or degenerative arthritis. Pregnancy can cause SI joint dysfunction. At the time of pregnancy several hormones will make the ligaments that surround the SI joint to relax. Due to relaxation the SI joints will make strong movements causing tear of ligaments.

This would cause SI joint dysfunction. Also when a woman becomes pregnant additional weight and pressure is exerted on the hip bone causing more stress to the SI joint. This would make the sacroiliac joint weaker causing more pain.

When a person makes abnormal walking pattern due to any injury on the thigh bones or feet this would eventually cause stress on the SI joints. Some people will have difficulty in walking due to hip injury, foot injury or due to structural abnormalities. They will develop severe problems in their lumbar spine and the SI joints. The SI joints will develop inflammation due to diseases like arthritis, gout and psoriasis. Ankylosing spondylitis is yet another type of arthritis affecting the SI joints.

The doctor will collect complete medical history of the patient before physical examination of the affected joint. He would find out if the pain is due to any other medical issues or it is due to the dysfunction of SI joints. He would place your hips and legs in different set of positions and exert gentle pressure on it by moving it awkwardly. It would eventually compress the SI joints causing intense pain.

He would order for imaging tests like X-rays of the lumbar spine and hips or request for CT scan for ascertaining the problem. Sacroilitis can be identified by CT scan correctly. It would give a clear report of compressed ligaments and subtle fractures (if any) on the joints. Bone scan is also done for isolating the source of pain. In some cases he would inject local anesthesia directly on the sacroiliac joint for creating temporary numbness by which he can identify the exact source that causes pain.

Very often corticosteroid injection is given directly into the SI joint for getting relief from pain. Taking this shot can give relief for few days to several weeks depending on the intensity of inflammation. You can repeat this injection course every month along with oral medications like Ibuprofen or naproxen. Painkillers can be taken for long term provided the patient is not having any other medical issues.

Physiotherapy is very effective in treating sacroiliac joint dysfunction. Your therapist will teach you stretching movements and exercises which you can practice daily for getting permanent relief from pain. Some people use sacroiliac belt for keeping the portion intact (without movement) which will eventually reduce the pain. Certain yoga postures and exercises can improve your life gradually.

Surgery is the last option for sacroiliac joint dysfunction if no other treatment is providing good relief for the patient. The surgeon will fuse the SI joint thus decreasing the movement to the minimum. The damaged cartilages surrounding the SI joint is removed and subsequently the bones are fused together with screws and plates. This will restrict any type of movement of SI joint thereby giving permanent relief from pain. 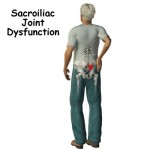 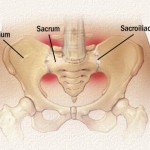 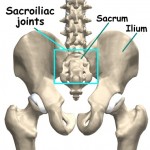