Elderly people and people with weak immunity may develop potentially dangerous infection known as sepsis. One out of 4 people developing septic shock are likely to die due to severe infection. Each year millions of people develop this infection which can damage multiple organs like kidney and liver. Once the infection develops in the body, it releases poisonous chemicals into the bloodstream. This in turn would cause inflammation over the entire body.

If the sepsis proceeds to septic shock, it produces number of blood clots thus blocking vital oxygen supply to the organs leading to organ failure. Blood pressure would drop drastically causing death. Serious types of infection are the major cause of sepsis and early diagnosis and prompt treatment only could save the life of the affected person.

Sepsis begins with inflammation of the body, proceeds to severe sepsis and finally causing septic shock. It can be life threatening if not treated at the early stages.

Symptoms of 3 stages of sepsis are given below :

A person should have severe infection for developing sepsis. He may develop drastic changes in body temperature either too high or too low. The temperature of the body can fall below 96 F or go above 101 F, depending on the case. It can cause irregular heartbeat (above 90 beats per minute) and difficulty in breathing.

People having severe sepsis may show symptoms including shortness of breath, mental confusion, disorientation, discoloration of skin, very low urine outflow and abnormal heartbeat. All the above signs indicate organ failure and platelet count drops down below normal level. Due to reduced oxygen supply to the brain, the individual may collapse.

In addition to the above symptoms, the affected individual would develop sudden decrease in blood pressure leading to death. His skin would be very cold and death occurs mostly due to organ failure. Unless the patient is hospitalized and treated with vital intravenous fluids the chances of survival are low. 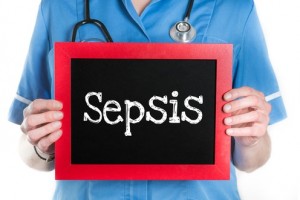 Sepsis is a serious life threatening condition requiring immediate medical care. It can lead to multiple organ failure, death of tissue, clotting of blood in various parts of the body and reduced blood supply to brain and heart. You may recover from mild sepsis (in the first stage) but the rate of mortality is high in second and final stages.

Any type of severe infection caused by bacteria or virus can cause sepsis. Some of such infectious diseases are pneumonia (lung infection), kidney infection, and abdominal infection. Some people may develop bacteremia causing blood infection. Weakened immunity and very old age are also the causes of getting severe infection leading to sepsis.

Elderly people, people with weak immune system, people who are in ICU for long term and people with severe skin infection may develop sepsis.

Since the symptoms of initial sepsis are often confused for side effects of infection, it is difficult to diagnose sepsis. Your doctor may order for complete blood test, blood clotting test and kidney function test. To check the level of electrolytes, he may order for urine analysis, sputum test (to diagnose pneumonia) and imaging tests like X-ray, CT and MRI scan.

Early intervention can make one fully recover from sepsis. Right diagnosis and vital treatment is necessary for sepsis. If the person has developed sepsis shock he has to be put on lifesaving machines to boost heart function. Depending on the health condition of the patient, necessary treatment is to be provided promptly. Antibiotics are given through IV supply for killing infectious bacteria or virus. Broad spectrum antibiotics are administered even before the test results have come.

For managing blood pressure, vasopressor drugs are given which can constrict blood vessels interrupting blood clots. Medications for triggering immune system are given intravenously. The patient will continue to remain on the supportive care of oxygen supply until he is out of danger. In case the kidney function is impaired dialysis is done promptly.