You are here: Home / Information / Side Effects of Antibiotics

The word “Antibiotics” means drugs that are meant to fight against bacteria. Bacteria are small microscopic organisms and not all of them are bad. Some bacteria cause infections and spread illness and antibiotics are used for killing them. They are also called antibacterial since they are largely used medications for destroying bacterial growth and preventing many kinds of diseases.

Side effects of antibiotics are varied according to the type of medications you have taken and its dosage. Some of the common side effects are diarrhea and stomach upset. If you have vomiting, diarrhea, shortness of breath, and severe watery stool with abdominal cramps you need to consult your doctor without any delay. For some people white patches may develop on the tongue and there can skin rashes.

Some of the common types of bacterial infections are meningitis, tuberculosis, syphilis etc. Actually our body’s immune system will vigorously attack and destroy bacteria once they infect our body. There are white blood cells called leucocytes that fight against bacteria destroying them. But when the immunity is weakened the defense mechanism is not enough for killing multifold growth of bacteria and during that time we take medications. Penicillin is the first antibiotic discovered and wide range of antibiotics is used for treating many illness and infections. Antibiotics are generally prescribed by doctors and you cannot obtain them over the counter.

Of late there has been a growing concern that people are overly using antibiotics that it is no more resisting the growth of bacteria. Hence this has paved way for increased bacterial infection since they are becoming resistant to these drugs. As per the statement issued by the European Center for Diseases Prevention and Control ECDC every year around 25,000 people die due to antibiotic resistance. In the America and Southeast countries people are overly using antibiotics as self medication even for mild illness.

Once your doctor diagnose that you have been infected by bacteria he would prescribe you suitable antibiotics. This antibiotic targets the bacteria and destroys them and prevents their growth further. However antibiotics are not competent enough to kill virus infection and they can attack only bacteria. But people continue to take antibiotics for sore throat or upper respiratory tract infection which is caused by virus.

When they are overused bacteria develops resistance in due course thus not getting attacked by the medications. In serious cases, antibiotics overuse can cause side effects like kidney stone formation, blood clotting, blood disorders and sensitivity to sun. Very often watery discharge of stool and vomiting are observed. Some people will respond serious allergic reaction to penicillin like rashes, swelling of tongue and shortness of breath. They are called anaphylactic reactions and you need to tell your doctor if you have allergy to particular antibiotic. Similarly antibiotics can interact with other medications you are taking regularly. You should consult your doctor before taking any antibiotics in case you are taking other drugs.

Side effects of antibiotics will be more severe on pregnant women, breastfeeding mothers and patients with kidney and liver diseases. 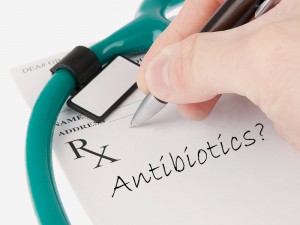 Some Of The Common Antibiotics and Their Side Effects Are Listed Below :