Skin ulcers are sores or wounds that are kept open causing inflammation of the upper layer of the skin. Skin ulcer develops due to many cases and medical conditions and environmental factors. Very often, the affected person will have an open sore that looks very much like a crater. Mild to moderate types of skin ulcers will heal within few days or weeks. But when it gets infected it can cause serious consequences and need immediate medical care.

Skin ulcer is a crater on the surface of the skin which has a depressed center part surrounded by shiny outer layer red or brown in color. It indicates deterioration of the skin in stages. Some of the signs of skin ulcer are redness on the skin surface, presence of open crater, sloughing off the skin tissue and in severe cases the underlying muscles and bones get exposed. Once skin ulcer is formed it sheds off the cells in that area making the area more exposed to infection. If not treated within time, skin will degrade making the problems worse leading to formation of blisters or pus filled liquid.

Some ulcers get infected forming blisters on the skin that contains pus. After some time, the blisters will break open forming a crater. There will be pain and skin bleeding along with tenderness. Red streaks are found in the skin indicating swollen lymph nodes on the affected area. It can also cause fever and chills and body pain.

Some of the causes of skin ulcer is given below:-

Due to accumulation of unwanted fluids under the skin, it exerts pressure on the skin causing skin ulcers. Gradually the buildup fluids will block the blood cells that remove waste particles. The tissue of the skin grows weaker since it is not able to receive proper nourishment. An ankle ulcer is caused due to this condition. Due to the excess of fluid, there can be swelling of skin tissue and poor circulation causing many disorders.

People with various diseases like diabetes, kidney problems, and auto-immune disorder like lupus, circulatory problem and hypertension can affect the skin causing skin ulcer. Even a small infection can become skin ulcer for people with high blood pressure and cholesterol. Diseases like arteriosclerosis, sickle cell anemia, inflammatory bowel disorders can cause skin ulcer.

People who are confined to bed for long term can develop bedsores which may turn into skin ulcer. Due to the constant pressure on the same area caused by lack of movement, pressure sores can develop since there will not be normal blood flow. The tissue of the skin will die eventually due to lack of oxygen.

There are two different types of skin ulcers. First one is the common type that affects the skin layer of feet and legs. Next one is the pressure ulcer that occurs when excess of fluid pressure is felt on the skin. Both these types will cause common symptoms of bumps or lesions formation on the affected part of the skin surface which looks like crater. The skin surface will become reddish due to formation of sores.

Based on the connection of tissue and intensity of sore or wound, skin ulcers or pressure ulcers are categorized into 4 stages. The tissue includes the superficial surface of the skin, inner dermis layer, bone, fat and muscle and joints inside. It is easy to manage skin ulcer if you know the right stage and condition.

There would be signs of sore formation and the skin color will change into red and look swollen due to edema (fluid buildup). There will be only limited ulcerous growth on the superficial surface of the skin not causing much damage.

This stage occurs when there is no healing for weeks together after the first stage. Here the skin will intensely lose thickness and expose the inside dermis layer. Now the sore will slowly turn into lesions or red colored blisters causing pain and discomfort. There will be a center depression on the blister which is bounded by yellow or white layer in the edges.

Now the skin will lose total thickness indicating fast destruction. At this stage the crater will expose the underlying bones and muscles beneath the skin. The infection will slowly attack and destroy the bones and tissues underneath causing more irreparable damage. The crater will become very deep with undermining tissue.

This is the terminal stage of skin ulcer where the infection progresses rapidly destroying bone and supporting structures under the skin.

The purpose of treatment is to remove the pressure that causes ulcer. First the blister or sore should be cleaned with soap water and allowed to dry. Whirlpool bath is to be given for skin ulcer and cleansed daily. Protective bandages are to be applied or splints are used. Your doctor or attending nurse will apply antibiotic creams before putting a bandage on the sore. Often, the ulcers will heal within a week or two but it will take even a month for getting back the old skin color.

For severe cases, the infected tissue of the skin will be removed by surgery so that it will not infect the surrounding areas. Skin ulcers are difficult to be treated and it takes long time for complete healing.

Antibiotics are given for bacterial infection that has developed on the skin. Medications like cefepime, cephalaxin, amoxicillin, sufamethoxazole, cefazoin, amphicillin, linezoid and metronidazole are commonly used either in the form of oral pills or topical ointments. 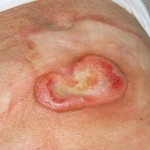 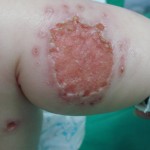 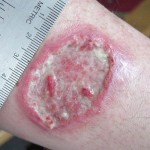 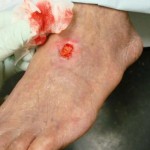 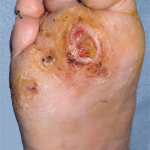 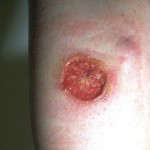 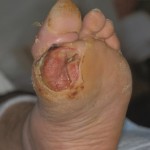 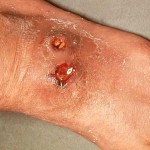 You need to keep the skin well protected and clean to prevent the growth of skin ulcer. Avoid causing injury on the skin, since damaged skin is more prone to injury than normal skin. Keep the skin well moisture by applying moisturizing lotion. Dry skin or flaky skin increases the risk of forming pressure ulcer.

The areas of skin fold should be preserved for friction and you should control the moisture in places like armpits and groin. Avoid injuries on foot and hands. If the legs are swollen, keep them in elevated position to increase blood flow to the heart.