Stuck stomach often has no medical significance. It is the feeling that something is wrong in the stomach and something has got stuck in the stomach. It can be food or something else. Digestive tract begins from your mouth and ends with rectum. Any obstruction or blockage in the digestive tract can cause multiple problems. And the tract can be affected by various factors and medical conditions. Movement of food in the stomach and colon should be normal and any blockage in the tract can cause reduced movement and sometimes the food gets backed up giving rise to certain medical conditions like stuck stomach.

Many people feel and perceive “stuck stomach” though there is no physical obstruction inside the stomach. In some cases real obstruction in the movement of food is present.

1. Hiatus Hernia – Esophagus is thin tubing that runs from your throat and crosses the chest region, ending in the upper part of the stomach. Diaphragm is the organ that separates the abdominal cavity from the chest and esophagus makes a small opening into the diaphragm before entering the stomach. This opening is fixed with sphincter muscles to regulate flow of food and fluids from the throat into the stomach. Actually these muscles opens when something is to be sent inside the stomach and remains closed other times.

But sometimes due to back pressure and weakening of muscles it gets opened through which semi-digested food particles along with enzymes enters the throat cavity causing heartburn and regurgitation. When this process happens repeatedly it can lead to pushing up of some fatty tissue of the stomach into the diaphragm and this condition is known as hiatal hernia. A small portion of the stomach gets squeezed into the diaphragm and remains there for some time after which it gets finally released and sent into the abdominal cavity. Any injury in the diaphragm and sphincter muscle and forced (repeated) coughing can cause hiatal hernia.

2. Gastroparesis – Here, some muscles of the stomach do not function properly in emptying the bowel. This condition can occur due to nervous disorder present in the vagus nerve. On account of this, food remains in the stomach for extended periods inducing a feeling of stuck stomach.

Taking antidepressant medications or painkillers can cause gastroparesis. Medical conditions like prolonged diabetes can lead to diabetic neuropathy (nerves may not function properly) and any surgical damage on the intestine, and Parkinson’s disease can cause stuck stomach. 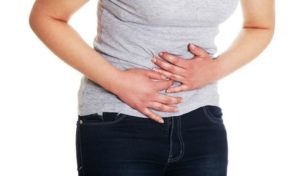 3. Presence Of Foreign Body – In rare cases the person may swallow any foreign objects accidentally which can get stuck in the esophagus and sometimes it can pass into the stomach. There may not be any way for the object to get expelled from the abdominal cavity leading to “stuck stomach”. This condition can occur in young children and infants. In severe cases some part of the stomach gets strangulated.

4. Improper Gastric Emptying – Food is chewed well in the mouth and mixes with saliva before entering the food pipe. It gets into the stomach wherein plenty of enzymes from the liver and stomach act upon it breaking down the food particles into small pieces. It gets grinded well forming semi-solid substance called “chime” in the stomach and finally enters the duodenum wherein absorption takes place fully. For some people gastric emptying of the food particles may not be regular leaving behind some particles in the stomach.

This condition can occur due to various factors like malfunction of the liver, imbalance in certain hormones and any problem in the intestine. Any malfunction of organs in the digestive system can cause improper gastric emptying leading to “stuck stomach”.

5. Problems In The Intestine – Certain medical conditions like irritable bowel syndrome, gallstone ileus and tumor like growth in the intestine can cause feeling of “stuck stomach”. Other factors like polyps in the colon, partial paralysis of the nerves in the large intestine and fecal impaction (hardened stool on the end of rectum will not allow rest of the fecal expulsion causing retention of feces) can cause improper gastric emptying leading to stuck stomach.

Some pregnant women can experience such stuck stomach feeling and cannot eat well during the third trimester of pregnancy. Growing uterus will exert enough pressure on the stomach causing delay in the emptying of bowel.

Pain in the abdomen, feeling of fullness, bloated feeling, burping and belching and consistent pressure in the stomach is some of the symptoms of “stuck stomach”. In severe cases it can cause loss of appetite, nausea, vomiting and constipation.

Any obstruction in the small intestine will not allow easy movement of food particles eventually causing backup. This can cause stuck stomach.

Post operative conditions after surgery in the intestine and Crohn’s disease and malfunctioning of intestinal muscles can cause obstruction. In some cases, small portion of the intestine gets stuck in the stomach’s pouch or in the walls of the abdomen. This can cause stuck stomach.

Endoscopy is the right option for detecting any problem in the abdominal cavity. A small thin tube having a tiny lighted camera on the other end is sent through the mouth and closely monitored on the screen to detect any abnormalities in the cavity. Complete checkup of the esophagus, stomach, small and large intestine can be done in this procedure. If necessary, your doctor would remove small tissue sample from the intestine to get it tested in the laboratory for detecting any cancer.

In most of the cases of stuck stomach taking over the counter antacids are effective. Mylanta, Antigas, and other drugs with simethicone can be taken. For breaking up of certain solid carbohydrates and other particles, Beano can be taken.