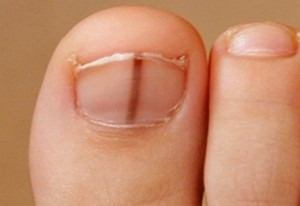 If there is any changing pattern of the toenail or thumbnail you need to check with your health care provider. Pigment band measuring more than 3mm in length can be subungual melanoma. Dermatologist can examine the nail with special device to observe color changes, expansion of the width and space changes. The lines of band pigment will not run parallel to one other like normal nailing pattern. If the doctor is doubtful of the diagnosis, he may order for biopsy of the affected nail matrix. A small tissue sample is collected and tested in the lab for the presence of cancerous cells. The pathologist would also clarify whether the melanoma is invasive or in-situ. 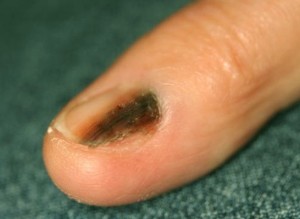 Local excision of the affected nail-bed is done if the melanoma is less than 1mm in breadth. Subungual melanoma is often removed by cutting off the entire nail matrix. In severe cases if the melanoma has spread intensely, the toe or affected finger is also removed. In rare cases the cancer would have spread to the nearby lymph nodes also and treatment is done as per the severity of the stage of cancer. Chemo and radiation are considered as last option if the cancer has metastasized to other areas.

Patients with subungual melanoma where the cancer has not metastasized can live long. In this case since only the nail is affected and no other symptoms are present, often it gets delayed to diagnose it and get it treated. By then, the cancerous cells could have spread to the bones underneath and also to the nearby lymph nodes. Survival rates depend on the extent of spreading of cells and how far it has affected. Hence prognosis is poor in such cases.