It is very painful to remove the tattoo which you have applied with great desire and expectation. However there are some compelling circumstances that forces one to remove a tattoo. Some of them include severe skin allergy and infections. There are some people who would not like the embedded design anymore. They opt for removal of tattoo and applying fresh ones at the same/different sites. Tattoo is fixed roughly 1 mm below the skin surface and during the process of removal your artist would destroy the applied pigment from the dermis layer. This can cause scarring of skin and slight damage to the underlying tissue.

There are several methods in which tattoos can be removed.

Though it is expensive, laser treatment is considered to be the ideal method for tattoo removal. It leaves almost no scar on the tissue and hence has become the most preferred option for tattoo removal. In laser therapy, the technician would send short pulses of light radiation which would penetrate the skin layer to break up the applied dye from the skin. The surrounding tissue would remain untouched during the process. After the ink has been broken into tiny particles, the immune system of the body would get triggered to expel those particles totally from the body.

Laser method uses Q-switched laser beam of light directly on the pigment. Several kinds of light waves like Alexandrite, ruby, and yag are used for removing colored dye/pigment from the skin layer. Each one of them uses specific colored light to break down the ink into small particles that are to be expelled from the skin. But don’t expect laser method to be complete in one session. You may have to repeat several sessions with fixed intervals of time for getting the expected result. It would take anywhere from 4-18 months for complete removal of the tattoo image from the skin. Again the results may vary from one person to the other.

You would be given local anesthesia so that you may not feel any pain or discomfort during the removal process. The site can get swollen and become reddish looking like sunburn for few days. But this is quite normal in laser procedure. You should avoid exposure of the site to direct sunlight.

Registered nurses/technicians would perform the laser tattoo removal process in most of the states. In some states even a non-medical person can perform the process after getting a proper license. It might take $125 minimum for each session and you have to repeat several sessions for complete removal. The cost may differ depending on the size of the tattoo image.

This procedure can be performed only by a cosmetic surgeon or dermatologist in a hospital setting. This is something like surgical process in which the epidermis layer of the skin would be peeled off using specialized tools. You will be given local anesthesia so that you may not feel any pain during the procedure. The site may get swollen and tender for several days after the procedure. The result may differ widely from one person to the other. It may cause scarring of skin. 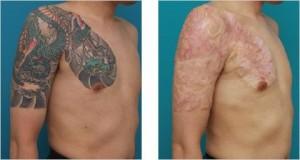 It is reported that 1 out of 4 people opt for tattoo removal for various reasons. Some people go for removal for better employment chances and some others are forced to remove it due to complications and infections.