We all know that the main function of the throat is to swallow and gulp anything placed inside the mouth. But in reality throat does several functions throughout the day and night in keeping you alive. Throat serves as an excellent transport system meant for moving air, fluids and any solids.

It is the trachea inside the throat that receives oxygen pushing it into the lungs. One can feel the pulse of heart by gently pressing the throat. Throat starts functioning from the minute the baby is born and continues to function until he dies.

Every organ in human body has been devised meticulously in proper shape and size suiting the way it functions. Accordingly throat is a narrow elongated part connecting your head to the shoulders. Throat begins at the back of your mouth and ends in the upper part of the stomach.

As long as a person is alive throat functions non-stop helping in breathing and swallowing. And once your throat stops functioning normally you would have pain or difficulty in breathing/swallowing and if it is strangulated you would die.

The throat can be defined as the anterior part of the neck in general terms. In the anatomical terms, it is the segment of the digestive tract that begins from the back of the mouth. A throat is very soft and delicate organ that gets easily irritated causing painful sores and ulcers.

Parts Of A Throat

Based on anatomy, throat can be divided into 3 parts namely, the upper part, the middle part and the lower part called as nasopharynx, oropharynx and laryngopharynx respectively. 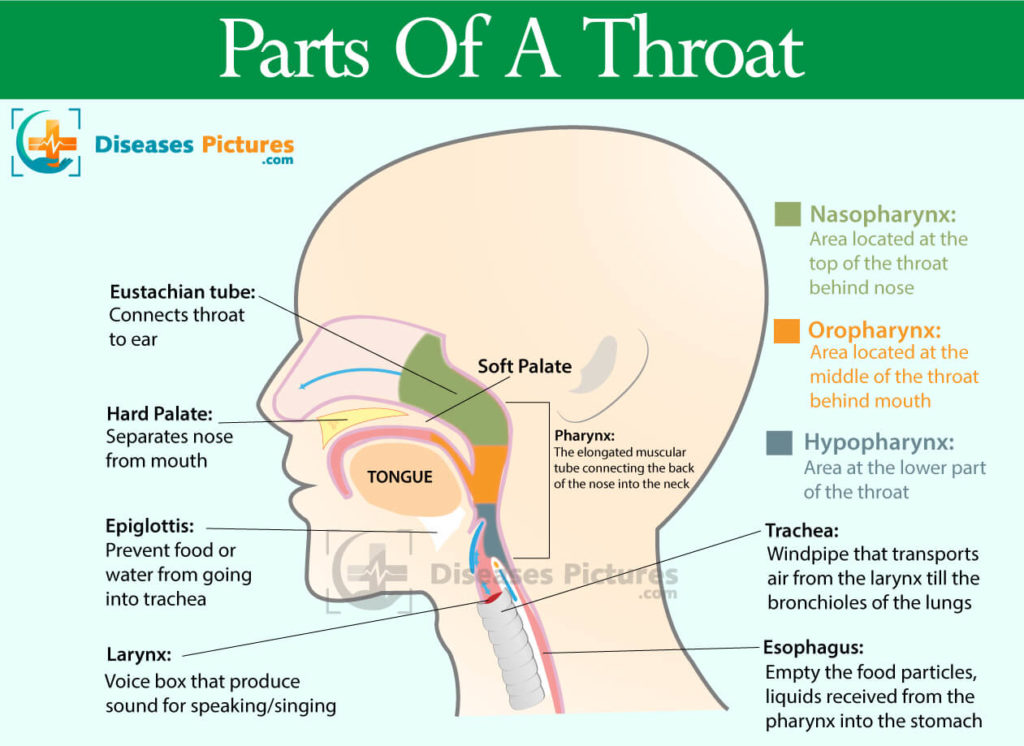 How Food Is Sent Into The Stomach And Not Into The Windpipe?

It is the larynx that is responsible for diverting the food or fluids into the stomach and not into the lungs. Whenever you eat/drink something the larynx slightly rises making the epiglottis to move up and down over the glottis.

This creates a tight seal over it thus not allowing food particles into the lungs. In rare cases food or fluids can enter into the trachea by mistake. But it automatically creates coughing expelling the food outside so that it does not block the airway.

Similarly food particles do not enter into the nasal cavity or block its path. A small tissue flap (uvula) found at the back of soft palate of the mouth rises up to cover the nasal path located above. Thus the larynx is built with excellent switching mechanism so that you will not send food particles in the wrong way. Even when a person stands on his head (like in yoga posture) the saliva will not enter into the trachea by this mechanism. 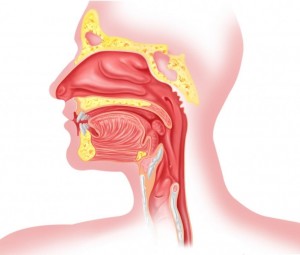 The throat is designed to perform precise events in proper timing which keeps you alive all the time. Any abnormal changes in your throat persisting for few minutes will collapse the person. Throat is considered as an excellent transportation media switching and moving tissues and cartilages to allow transfer of air and food particles at equal pace. The neck is complex organ loaded with blood vessels, nerves, tubes and cartilages. The major function of the throat lies in organizing the exchange of air and sending the food particles into the right path thus managing two separate channels efficiently.

When a person coughs or sneezes he expels the irritants that have traveled in the wrong path thus protecting the windpipe and lungs. Coughing is the involuntary defense mechanism designed by the throat to catch and punish the trespasser quickly. By the act of coughing, the throat would expel the irritant material with such a force that it gets out not only from the mouth but it is thrown out a few miles away.

At the sight or smell of food the salivary glands secrete excess of saliva. Once you put some food into the mouth the saliva mixes with food and as your teeth chews it to break down the particles into small pieces. When the mouth gets filled with food the tongue pushes the mass through the throat sending it into the esophagus. Several muscles work rhythmically to push down the food through pharynx. In the meantime, the larynx closes automatically to prevent any food particles to escape into the trachea.

Air is pushed down with force through the larynx when a person talks. The larynx or voice cord consists of several folds of tissue that produces vibration in response to the pressure of air applied on the folds. Volume and intensity and nature of voice vary according to the air that is pushed into the larynx. Continuous stretching and relaxing of folds of tissue on the larynx produce noise and that is how we talk or sing.

In What Ways Throat Gets Damaged?

The throat is the only way for transporting air and food and hence it becomes the primary target for micro-organisms. The throat is constantly invaded by millions of bacteria and fungi. The thick mucus blanket lining and the tonsils helps in moving them away from the throat. But sometimes the invaders are more powerful than the parts of throat causing irritation of the lining resulting in sore throat.

Among the parts of the throat, larynx becomes the target for major pollutants and invaders. Any type of smoke, fumes and automobile exhausts can affect the larynx causing laryngitis. The voice gets damaged making it hoarse. Larynx is at risk of developing cancer when a person smokes a cigar. If your voice is not normal for more than a week you need to check with your GP to prevent any complication.