Tinea capitis (commonly known as ringworm) is an infection affecting the hair on the scalp. It causes itchy patches on your head and the infection is contagious. Often school going children and infants picks up this infection. Suitable medications are given for treating this infection. The pattern of infection of tinea capitis is not the same for all the people since it varies with the organisms that cause it. Sometimes animals can be the host for carrying the micro-organisms which in turn enters the skin through the scalp causing skin irritation and red scaly patches.

Some of the common signs of T. capitis are scaly red patches on the scalp. The patches will start as a small red spot which will slowly grow in size forming circular patches. The hair will eventually fall off in the place where patches are formed. It causes consistent itching and irritation on the affected area. Often it is the brittle hair that gets infected first on your scalp. Since the infection is commonly seen in young children and infants you need to consult your doctor once you notice any changes in his scalp or hair loss.

A fungus is the main cause for T. capitis. It attacks the outermost layer of the skin surface on the scalp. Ringworm or tinea capitis is not caused by worm. It derives the name due to the formation of ring like patches on the scalp.

How It Is Contracted?

Toddlers and school going children and those who are in day care centers are at increased risk for developing T. capitis. A sudden outbreak of ringworm is common in child centers and schools where infection can spread easily. Children who play with pet animals that is infected are prone to develop this infection. In severe cases, it can form painful inflammation on the scalp leading to hair loss.

Your doctor will examine the scalp of the affected child closely and if necessary he would collect small amount of scrapings from the scalp for testing. On testing under the microscope it would reveal the type of fungus that has caused the infection.

Often antifungal medications like Grifulvin V or Gris peg is prescribed for T. capitis. It is necessary for the affected child to follow complete course of medication without interruption. Depending on the intensity of infection, 4-6 weeks of medications are prescribed. Alternatively fluconazole or terbinafine are also given. Your doctor may also prescribe medicated shampoo for your child to remove the leftover spores from the scalp. You should not send the infected child to school or child care center since the infection may easily spread to other children. 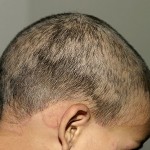 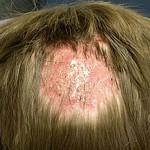 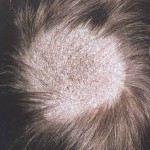 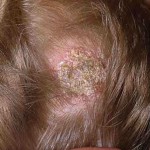 It is difficult to prevent T. capitis since the ringworm fungus is highly contagious. You need to inform your children about the ringworm and teach him/her the methods of avoiding infection. Ensure that your child is having regular head wash so that no dirt accumulates there.

If you are having pet animals, ensure that they are safe and free from any infection. In most of the cases, the animals may not show any signs hence it is difficult to identify the infection. Instruct your children not to share any personal items with other children since it gives high risk of developing the infection.