Gas is normally eliminated either by burping or releasing it through rectum. However some people have trouble of trapped gases inside their stomach. On an average healthy individual passes gas about 10-13 times a day. Gas released out is usually odorless if it contains vapors of nitrogen, carbon dioxide and hydrogen. But sometimes it may have foul smell if it contains bacteria indicating presence of sulphur compounds in it.

What Causes Gas to Get Trapped ?

Gas is basically produced by swallowing of air particles and by the digestive process of foods. Swallowing of air (aerophagia) is also one of the common causes of trapped gas. We all swallow minute quantities of air while drinking and eating and smoking. It is normally released out by burping and some quantity of gas is sent into the small intestine and further into the large intestine. Most of the gaseous particles are reabsorbed into the blood and only some amounts will enter the rectum.

Gas also gets trapped when undigested food is acted upon bacteria to produce hydrogen, CO2 and methane. However individuals vary from one another in producing gas. Some individuals are capable of producing gases whatever food they take in. Foods rich in carbohydrates, sugars like raffinose (present in beans), lactose, fructose and starches like potatoes, noodles and wheat products. However fats and proteins do not make any gases. Rice is an exceptional starch that does not produce any gas. Fibrous foods and soluble fiber like beans, peas, bran and many fruits produce gas in the large intestine where it gets digested fully. 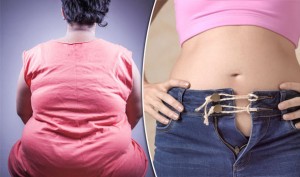 Your doctor will ask your dietary habits and look for other symptoms. Very often, doctors will ask the patient to maintain a record of number of times he/she releases gas per day. In case if the person has other symptoms of abdominal pain, diarrhea and weight loss, colonoscopy is done for checking the function of colon.

The best and easy way to manage gas is by diet. You should follow eating more number of small amounts of food in frequent intervals than eating full meals. You can reduce the intake of fatty foods so that your stomach becomes empty fast. Since there is variation from one person to another in the process of digestion, one should adopt trial and error method for finding the right diet habit to minimize trapped gas.

Non prescription medicines include antacids that contain simethicone (Mylanta, Maalox II) can make belching easily and help in not retaining gases inside. Some people try using enzyme lactase in the form of Lactaid for clearing gases produced by dairy products. Prescription drugs commonly recommended by doctors include metoclopramide, cisapride and other prokinetic drugs. Another easy method to get rid of trapped gas is by reducing the amount of swallowing in air particles. Start eating small meals slowly instead of eating large meals rapidly.