It is a hereditary disorder that causes large deformity on the face of the developing child. In medical terms this disease is called as mandibulo facial dysostosis affecting one in every 40,000-70,000 child. It is marked by strange facial structure with obvious abnormalities present symmetrically and bilaterally. It is named after famous British ophthalmologist Treacher Collins who was first to describe the characteristic traits of this disorder. This disorder does not spare person based on their race, sex or religion.

The disorder of Treacher Collins syndrome TCS can be easily diagnosed during birth. Technology has improved very much to detect this illness even before birth using ultrasonography.

The face of the person is marked by abnormalities running both symmetrically and bilaterally. The nose appears large in size due to hypoplastic supra orbital rims. The cheek bones are drawn inward, the pinnae of the ears are abnormal and different in each child with varying sizes, and the mouth is turned downward direction.

A radiographic image of the child can show the deformity in the malar bones, frontal bones which are hypoplastic. The paranasal cavity and mandibular condyles are also hypoplastic. The orbits of lateral margins are either hyperteloric or defective. The cranial nerve is kyphotic and varied.

The outer layer of the ear (pinnae) is highly deformed. It can be crippled or folded in some angle or misplaced totally.

The nose would appear too big due to shortage of molar development and development of hypoplastic ridges.

Very often the child will have cleft palate and sometimes the parotid glands are not found. Obviously pharyngeal hypoplasia is found. The mandibular angle will be obtuse and the teeth look distorted. The child will certainly have difficulty in swallowing and feeding due to poor development of musculoskeletal organs and also due to cleft palate. He may have hearing problems partially or fully due to lack of normal development of auditory canal. His vision is also affected due to lack of lateral orbit and ocular muscles.

The actual cause of TCS begins as early as 6th-7th week of pregnancy. Neural crest cells will not migrate to the branchial arches as they are supposed to do in normal zygote. This in turn will lead to dysplasia and poor development of musculoskeletal organs. Hence the child may have both symmetrical and bilateral abnormalities in his facial features.

TCS is caused due to mutation of genes in the TCOF1 group which forms the basis of treacle protein synthesis. It is very essential for normal development of craniofacial features. Due to single mutation there may be shortage of this protein molecule which would terminate further growth of the fetus.

This particular gene of TCOF1 undergoes multiple mutation several times which would ultimately cause marked abnormalities on the face of the child.

Often, this condition is transmitted to the offspring from the parent and the intensity of severity may differ widely from one generation to the other.

The outer part of the ear will be almost absent or poorly developed which accounts for loss of hearing and speech. The child will have larger nose, small jaw, very large mouth, huge scalp hairs that touches the cheeks and defective eyelids.

The doctor can identify the disorder by physical examination of the newborn child. He would look for abnormal ears, nose, cleft palate, small jaw and defective eyes.

Since TCS is inherited and congenital (present by birth) nothing much can be done to control it. Treatment is given to set right the symptoms of abnormalities in various aspects. Loss of hearing can be corrected by having effective hearing aids.

The child may have normal intelligence and hence multiple surgeries are to be done for improving his self esteem and confidence level. A series of plastic surgery is to be done for repairing birth defects on his face.

Initially the swallowing difficulty of the child is to be corrected for preventing rapid weight loss.

Tracheostomy is done for correcting the airway inadequacy and in many children this would remain there for several years till the lower jaw of the child has grown fully. Feeding is done through gastrotomy tube which sends the mild directly into the stomach. Tongue obstruction is repaired by surgical adhesion which helps in pulling the tongue forward.

Surgeons and doctors from multidiscipline would work together for repairing the abnormal features of the child slowly. The deficiencies with respect to soft tissue are corrected before the child completes one year since it can leave more scars obviously on his face.

The lower eyelid deformity can be corrected using skin muscle flap pulling from the upper eyelids. Cleft palate is corrected significantly before the child completes 10 months since it reduces airway concerns.

Ears are the last part remaining for correction and the surgeon will wait for the ear to attain full growth. Using grafting material the ear is newly constructed using the cranial ribs of the child. It involves a series of surgery that is done in three stages. 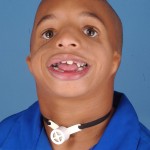 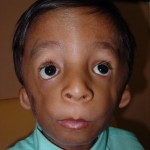 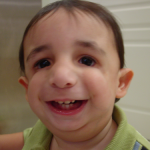 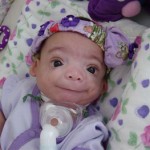 The parent who is expecting to have a child with such deformity can be warned about the magnitude of problems that the child may have after birth.