Trench mouth is condition of bleeding gums with painful ulcers. It is a rare disease in today’s world but still there are indications of trench mouth among people who live with poor nutrition. Trench mouth is also described as ulcerative gingivitis. It got its name since it was prevalent among soldiers of World War I who got stuck in the trenches with no ways for dental care. This ulcerous disease is not contagious.

Some of the symptoms of trench mouth include bleeding of gums, swollen gums, pain while eating or swallowing, gray coated film on the gums, ulcerous growth on the gums, foul taste, bad odor and low grade fever.

It will not take much time for the symptoms to develop since it will develop in one or two days.

Our mouth is consistently packed with microorganisms like fungi and virus, but not all of them are harmful. Sometimes, these bacteria grow and multiply densely producing more harmful bacteria which start infecting the gums. This in turn will damage the soft tissue called gingiva of the gums and destroys it.

Hence ulcers are formed on the gums which may be painful and bleeding. Often the ulcers are filled with food debris and multiple bacteria causing severe pain and bad smell.

Hence trench mouth is caused by harmful bacteria and more particularly by the enzymes secreted by them.

People with poor nutrition, poor oral hygiene and those prone to throat or mouth infections have increased chance of getting trench mouth. Smoking and using any form of tobacco can directly harm the gums making room for bacterial growth.

When the immune system gets weakened due to diseases or infections or due to heightened stress it can affect your gums causing ulcers.

Physical examination of the teeth is enough to detect ulcerous growth on the gums.

It is easy to treat trench mouth with a couple of medicines. But it may take more time if you have autoimmune disorder or having other infections in the system.

Antibiotics are often prescribed for destroying bacterial growth on the gums and preventing it from further infection. You can apply pain relieving gum on the teeth for managing pain and swelling of gums. It is important to consult your dentist after the onset of symptoms since inordinate delay may weaken the gums.

The dentist will clean the teeth by removing the decayed food particles and dead tissues of the gums for reducing pain. You can wash the mouth with antiseptic rinse. For some people your dentist will perform scaling procedure for removing plaque below the gums.

After complete healing you should brush your teeth twice a day properly. Regular flossing is also recommended to prevent bacterial infection. Surgery is done for individuals with severe damage caused by trench mouth.

Your teeth may be painful until the gums heal properly. Hence you need to stay on liquid diet and avoid taking hot and spicy foods. 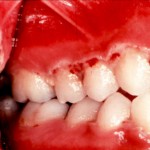 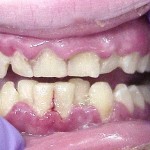 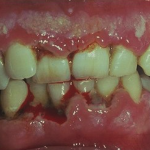