Patau syndrome is a disorder developing due to abnormal chromosomes inherited by birth. Presence of extra genes in chromosome number 13 is known as Patau syndrome or Trisomy 13. Children born with this syndrome would have severe mental dysfunction in addition to physical abnormalities. Extra number of chromosome is present in all the cells when the baby is formed causing severe intellectual and physical problems. Such children would have birth defects in the heart, brain and various other vital organs due to unwanted chromosome distribution in the entire body cells. Exact cause of Patau syndrome is not known and there is no cure for this disorder.

Children born with Patau syndrome will have marked physical problems from eyes to foot. They would be born with defective heart, defective spine and underdeveloped eyes. Brain would have serious anatomical defects and it may not divide properly. There would be a cleft lip (small opening) along with cleft palate (small opening in the mouth). The muscle tone will be very weak leading to hypotonia.

The baby may have extra finger in hands and foot. Owing to the various physical problems these infants would be stillborn or may get aborted in the uterus. In rare cases only the baby survives birth but may live only for few weeks. In addition to the above physical abnormalities such children would have severe intellectual impairment.

How Common Is It?

Patau Syndrome or Trisomy 13 is very rare disorder. Statistics say that one out of 16,000 births would be of this syndrome.

Women having close relatives infants born with Patau syndrome are at risk of passing on the disorder to her baby. Women who give birth after 35 years have slight risk of developing genetically abnormal baby.

Patau syndrome is a genetic disorder. The affected child would have 3 identical copies (hence the name Trisomy) of chromosome 13 (instead of 2) in each and every cell of the body. Extra genetic material would have been migrated during the formation of chromosome 13 from another part leading to Trisomy 13. This may occur as and while fusion takes place between the eggs and sperm forming a zygote.

The parents of such an offspring would contain no extra chromosome number 13 but normal copies of it. In rare cases part of 13 no. chromosome is seen in all the three copies and such babies would not have many abnormalities as Trisomy 13. Here the extra chromosome is found in only some of the body cells and such cases are referred to Mosaic trisomy 13.

Exact cause of attachment of extra genetic material on chromosome 13 is not understood. Often Patau syndrome occurs as random events that happen during the formation of zygote. The parents of such babies would be healthy but error may occur during cell division causing the zygote with abnormal chromosome. Either the egg cell or sperm may get one extra copy of chromosome leading to Trisomy 13. If the genetic composition of the baby is made of such atypical reproductive cell then the developing fetus would have one extra chromosome in each cell of his/her body.

In some cases Patau syndrome can be inherited due to translocation of genetic components. A healthy father/mother may carry rearranged set of genes in chromosome 13 or some other chromosomes. During reproduction such rearranged chromosome is used for the formation of zygote thus passing extra genetic substance in each cell. A person with carrier gene is at high risk of producing Trisomy 13 children. 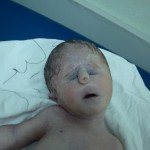 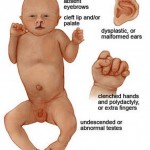 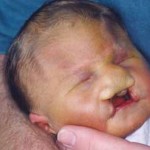 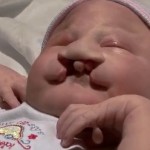 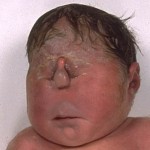 Infants born with Patau syndrome can be easily identified. Genetic abnormalities can be found even during first/second trimester of pregnancy. Chromosome testing can be done to confirm the diagnosis.

There is no cure for Patau syndrome. Most of the cases with this syndrome will not survive birth and even if they survive the fetus would live for only few weeks. Supportive oxygen can be given for such babies with Patau syndrome but often life supporting measures are not useful. Parents can be given counseling during and after childbirth. If any one of the parents is found to have translocated chromosome counseling should be given to prevent future pregnancies. Other family members would also be screened for chromosomal problem.

Rate of survival is very low and limited for infants with Patau syndrome. Patau, an American scientist first described this disorder in 1960 and hence the name Patau Syndrome.