The uterus or womb is a hollow bag like structure found in the pelvis of each woman. The fetus will grow and reside in the uterus till birth. The shape of the uterus resembles a pear fruit kept upside down. If the cells in the uterus grow and multiply abnormally it causes uterine cancer. Uterus cancer can develop on any woman but there are certain risk factors like obesity, old age, taking estrogen therapy, abnormal growth of endometrial tissue and family history that can increase the chance of getting uterine cancer.

There would be abnormal vaginal bleeding and pain while having sex if a woman has uterine cancer. It can be treated by surgery or chemotherapy or radiation therapy depending on the stage of cancer. Uterus has 3 parts namely top portion from where the fallopian tubes starts developing, the middle portion where the baby grows and the bottom portion that connects to the vagina. The wall of the uterus has an inner lining called endometrium which is normally thin and grows thick when the women becomes pregnant and an outer layer called myometrium or the muscle tissue.

Uterine cancer is also called as endometrial cancer begins in the fundamental unit of the cells of uterus. If there is some mistake in the cell formation that can lead to overlapping of cells building up a mass tumor it can cause uterine cancer. Not all the tumors in the uterus are cancerous; some can be benign and harmless. For instance polyp or a fibroid is also a tumor but they are not cancerous.

Malignant tumors are one that causes threat and invade other tissues and organs gradually. The cancer causing cells would eventually break down from the tumor travelling to the lymph nodes and other organs of the body. This process is called as metastasizing in which cancerous cells would attack to the new tissues of organ thus invading and destroying them.

Exact cause of uterine cancer is not known. Still it remains mystery whey certain women develop cancer whereas others don’t.

Sudden and abnormal bleeding from the vagina is the primary symptom of uterine cancer. Any abnormal bloody discharge after menopause is dangerous and needs to be examined. It can be spotting or watery bleeding from the vagina. Some women will have pain during sexual intercourse, pain while urinating and sudden sharp pain in the pelvic region if they have uterine cancer. All the above symptoms can develop due to other health issues also and need not be cancer. Hence it is advised to check with your doctor and get yourself examined to rule out any presence of cancer. 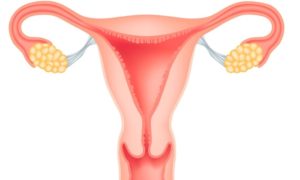 Certain risk factors like being obese, not having children, having menstrual cycle in early age (11 or 12 years), having menopause early (50 or 55 years), taking estrogen treatment for prolonged period, taking tamoxifen for long, and having endometrial hyperplasia (sudden increase of epithelial cells in the uterus) can cause uterus cancer. Women who are undergoing radiation or chemotherapy for pelvic cancer and women with family history of uterine cancer have high risk of developing uterine cancer.

Your doctor would listen to the symptoms and check your vagina and uterus thoroughly by pelvic exam. She would diagnose any changes or abnormality in the uterus by inspecting the shape of the uterus and ovaries. Ultrasound scan can give clear picture of the uterus if there is any tumor.

Biopsy is done for removing tiny sample tissue from the uterus and testing it in the lab. The pathologist would also determine the stage of uterine cancer by analyzing the tumor tissue completely. High grade tumors can grow rapidly and invade other parts and tissues.

Before starting any treatment, your doctor should have complete knowledge about the grade of cancer and how far the tumor has spread to the nearby tissues and distant parts. He would also consider your age and health condition during surgery. You can discuss with your doctor about the treatment options and its side effects.

Hysterectomy is done for removing the entire uterus along with ovaries, fallopian tubes and the lymph nodes nearby. The surgery is done under general anesthesia and the patient has to stay in the hospital for two or more days, depending on her recovery. It can cause pain and discomfort for few days but you have to follow the medications and instructions of your doctor. There is chance of getting nauseated after surgery for few days but it will resolve automatically.

Sometimes you can develop constipation or loss of control over bladder after surgery. These are only temporary and will get regularized after few days. Having hot flashes and dryness on the vagina is common after surgery. You can discuss with your doctor to devise suitable plan for treating them. Lymphedema is accumulation of fluids in the lymph nodes of the legs for which lymph nodes are removed.

Radiation is done normally before/after the surgical process. Radiation/chemotherapy is the only choice for women who cannot undergo surgery. Radiation is given externally using a machine where the patient would lie down on her back to receive radiation on her pelvic region. In the internal type (brachytherapy) of radiation a cylinder loaded with radioactive material is placed into the vagina during treatment session and removed thereafter.

Side effects are quite common in radiation therapy which includes constipation, diarrhea, nausea and vomiting. Some women will lose bladder control after treatment. It can cause scarring of skin and your periods may stop after radiation therapy. In some cases radiation treatment can narrow down the vaginal opening making it difficult for having sex and physical exam.

In this method, drugs are given to destroy cancerous cells. Uterine cancer in the advanced stage is treated with chemotherapy and also suited for women who are not a good candidate for surgery. Often radiation is also combined with chemotherapy. It can cause side effects like reduced level of blood cells (causing infection and bleeding), loss of hair and loss of appetite. It can affect the soft lining of the digestive system causing nausea and vomiting. Itching, skin rash and pain in the legs are also caused due to chemotherapy sessions. Hormone therapy can also be given for uterine cancer in the first stage giving progesterone tablets.

There is no way to prevent uterine cancer since the exact cause is not known. However you can reduce the risk of developing uterine cancer by having limited sex partners and practicing safe sex.