If you open your mouth widely before the mirror, you can see a tiny part hanging at the end of your throat, which is called as uvula. It is a tiny cone shaped tongue like structure that hangs from the soft palate of the throat. The uvula is the organ that creates sounds while you speak and is made of soft tissue and muscles. It also gives additional protection for the nasal cavity by screening the entry of bacteria and other micro-organisms into the digestive tract.

The uvula can become swollen due to many reasons like common cold or acid reflux. Swollen uvula can be treated by diagnosing the underlying cause that has caused inflammation. In medical terms, swollen uvula is called as uvulitis.

Uvula gets inflamed when the mucus membrane and tissues that surrounds the uvula develops swelling. This can happen due to some medical conditions like tonsillitis, dehydration, common cold, bacterial infection, acid reflux and allergens. In some people taking very cold or hot foods can cause this problem. Acid reflux disease can cause swollen uvula since the pressure of acid from the digestive tract can irritate the soft membranes of uvula leading to inflammation.

People having sleep apnea would have a tendency to sleep with opened mouth which can trigger infection of uvula causing swollen uvula. Snoring, smoking, excessive drinking and exposure to irritants can cause inflammation of the uvula. Sometimes canker sores that develop in your mouth can spread till uvula causing inflammation.

Some of the signs of swollen uvula include swelling of uvula, change in normal color of the uvula and slight enlargement of uvula. Sometimes white spots or bumps are formed on the uvula due to infection. It can cause symptoms like fever, sore throat and difficulty in swallowing food. There would be constant urge to cough (dry irritant cough) even there is no mucus or phlegm produced from the mouth. It can cause change in your voice (hoarse voice) since uvula is involved in the articulation of sound. People with swollen uvula tend to have gagging sensation and choking. They would be involved in drooling of uvula most of the time without their knowledge.

Swollen uvula can easily be diagnosed by mere physical exam. 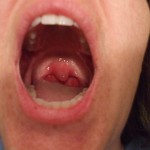 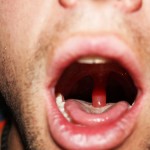 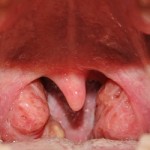 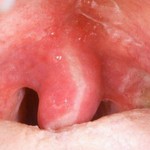 Plenty of home remedies are available for treating swollen uvula. You can make changes in your diet and avoid eating hot and spicy foods. Identify the cause that has triggered inflammation of the uvula and rectify it. Honey is excellent remedy for sore throat and swollen uvula. Mix some honey in a glass of lukewarm water and drink it. It can provide instant relief from pain and swelling.

Drink a glass of water mixed with apple cider vinegar. You can repeat this several times a day to manage pain and swelling. Avoid smoking or drinking when you have sore throat and swollen uvula since it can worsen the symptoms. In case dehydration has caused swollen uvula you can take plenty of fluids. Children with fever and sore throat refuse to eat/drink anything which can lead to dehydration. You can give them orange juice and plenty of water that helps in providing relief.

Add one teaspoon of salt in lukewarm water and gargle it several times a day. This can bring comfort to the sore throat and swollen uvula. It would considerably reduce the inflammation of the uvula and throat. Avoid eating hot and spicy foods and foods that causes allergic reaction. This can worsen the condition. Do not take anything too cold or hot since it can affect the soft membranes of uvula causing inflammation.

In case you notice white bumps on the tip of the uvula this can be due to infection. You can consult your doctor and take antibiotics. For treating swollen uvula due to severe allergy your doctor may prescribe antihistamines and sometimes steroid medications to reduce swelling. He may give you a shot of epinephrine to prevent further swelling and to manage pain.

Over the counter painkillers can provide comfort for swollen uvula. Surgery is the last choice for treating swollen uvula. This is done only if there is pain and considerable swelling which does not respond to any medication. People with sleep apnea disorder may snore severely that can cause constant swelling of uvula. In such cases uvulectomy (removal of uvula) is done.