You are here: Home / Information / Vaginal Bleeding – After Sex, After Menopause, During Pregnancy

Vaginal bleeding is the normal monthly menstrual cycle that every woman experiences. Normal form of vaginal bleeding is medically known as menorrhea. Abnormal vaginal bleeding is not related to normal menstruation. It is the bleeding or spots that occur for many women between periods. Some women may have extremely heavy periods so that they have to change their pads for every two hours or even less.

Normal vaginal bleeding occurs anywhere from 21-35 days for women. It is the lining of the uterus that sheds periodically during menstruation. The uterus prepares itself for the fetus by making a thick lining on its wall. When fertility does not take place it will automatically shed the lining in the form of blood every month. Normal monthly periods may last for 3-5 days for most of the women and for some it can be even up a week. Monthly cycle will be longer during adolescent ages and after 40 years and the flow can be heavy during these ages.

Abnormal vaginal bleeding indicates that the woman has some problem in her reproductive organs or it can be due to underlying medical causes. Any bleeding that occurs after a year or more without menstrual cycle is of great concern. Some of the possible causes of abnormal vaginal bleeding are cervicitis, celiac disease, adenomyosis, ectopic pregnancy, endometrial polyps or cancer, Chlamydia infection, changes in hormone levels, and changes in thyroid hormone. For the case of abnormal vaginal bleeding three factors are to be considered before taking decision. Pregnancy of the woman, pattern of bleeding, and ovulation are the major factors to be identified.

In the early stages of pregnancy there can be vaginal bleeding. Many times, she may not even realize that she is pregnant. Irregular bleeding can be a symptom of early pregnancy. Some women may also bleed once she has tested for pregnancy which may be due to miscarriage or abortion and sometimes due to ectopic pregnancy.

Your doctor will certainly ask you about the duration of bleeding, interval of bleeding and the amount of bleeding. It can be due to hypermenorrhea (bleeding for very long periods) or hypomenorrhea (short period bleeding). For some women menstrual cycle will occur very shortly which is known as polymenorrhea and very irregularly called oligomenorrhea. Similarly for some women it can cause heavy discharge or very low volumes of blood.

The ovaries are the reproductive organs of a woman which produces egg each month. Unless the ovulation process is correct, the women will not get menstrual periods regularly. There are certain symptoms to identify that a woman is having normal ovulation cycle. Some of them are mucus discharge from the vagina, breast tenderness, regular monthly cycle, menstrual cramps and mood changes. Abnormal vaginal bleeding can be the result of wrong ovulation process. It can cause prolonged bleeding for some women and not having regular cycles for many months.

Women who ovulate normally can have vaginal bleeding due to excessive discharge, frequent discharge and irregular discharge.

Menorrhagia is excessive vaginal bleeding which is common in almost 10% of women. They have regular ovulation cycle and menstrual periods but with heavy bleeding measuring more than 8 tablespoons of bloody discharge. Menorrhagia can cause anemia, cramps and other complications like dizziness and loss of weight. Blood loss can be severe and hence she may need urgent treatment. It can also be caused due to benign tumors on the uterus, endometrial polyps, using intrauterine device and due to thyroid problems. Some infectious diseases like lupus can also create this problem. In rare cases, it can also be due to endometrial cancer. Treatments are available for reducing heavy discharge of blood.

Polymenorrhea is a condition in which the menstrual cycle is irregular and too frequent. It can be caused due to sexually transmitted diseases like gonorrhea or Chlamydia and endometriosis.

Hypomenorrhea is reduced menstrual flow or vaginal bleeding during periods. It is caused due to hyperthyroidism or kidney diseases. Prolonged use of oral contraceptive pills can also reduce the blood flow.

It is the condition in which vaginal bleeding takes place between regular monthly periods. For some women it can be felt like spotting (light discharge of blood) between two periods. Hormonal imbalance, using anticoagulant drugs and emotional stress can be the cause for this.

Oligomenorrhea is reduction of number of menstrual periods and reduced flow. It can be caused due medical issues, eating disorder, anemia, and polycystic ovarian syndrome. If a woman who has no periods for one year or even more and suddenly getting vaginal bleeding, then it can be due to abnormal reasons. 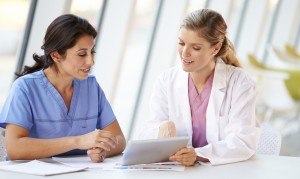 Vaginal Bleeding After Having Sex

Some women may have excess of vaginal bleeding after sexual intercourse which can be due to injury or trauma on the wall of the vagina, any infection (like gonorrhea or Chlamydia), due to lower level of estrogen or due to any tumor on the cervix.

It is reported that about 30% of women can have vaginal bleeding during pregnancy. It can be caused when the mother carries twins on her womb. For many women it is quite common to have scanty bleeding during the first two weeks of pregnancy which can be due to implantation bleeding. The process of fertilized egg getting implanted on the uterus is known as implantation. It can also be due to miscarriage or ectopic pregnancy or due to cervical polyp.

The doctor will first do a physical examination of the body giving more importance to pelvic area. She will identify the presence of cervical polyps (if any) during such examination or can find out whether unusual mass is present in the uterus. She may order for Pap smear test to collect small tissue sample from the cervix area for detecting any infection.

She may also request for pregnancy test if the affected woman is in premenopausal stage. Further she may call for routine blood culture to rule out anemia and thyroid problems. She will also check the levels of progesterone in blood and blood hormone test for eliminating polycystic ovary. Ultrasound scanning of the pelvic region will give a clear picture of the underlying medical issues.

It is for the doctor to collect maximum information and test reports to ascertain the actual cause of vaginal bleeding. The course of treatment will be given based on the test results and pelvic exam report. For women with thyroid problems or liver function or kidney problems medication is given accordingly. Progesterone drugs are given if the actual cause of vaginal bleeding is due to lack of regular ovulation. It will also reduce the risk of uterus cancer and reduce the risk of buildup of uterine lining that is precancerous in nature.

Most of the time, the problem can be solved by taking progesterone pills at regular intervals. Irregular bleeding due to menopause stage can be resolved by giving oral contraceptive pills which will provide relief from hot flashes also. Surgical intervention is needed if polyps or any other benign growths are found on the cervix wall or uterus. For vaginal bleeding due to uterine infection antibiotics are to be taken.

For more severe cases where medications are not responding, D & C (dilation and curettage procedure) is done for cleaning the lining of the uterus. In rare cases hysterectomy (removal of uterus) is done if excessive vaginal bleeding cannot be controlled by any other methods. This is done if the affected woman is found to have cancerous growth on her uterus.