Croup is respiratory infection commonly occurring in children causing barking cough. Young children are at risk of developing respiratory infection, particularly more during winter. It affects the soft tissues around the larynx (vocal cord) and bronchial tubes thus making it difficult for the air to pass through freely. This produces a characteristic whistling sound and persistent cough. Croup is a mild infection which can be treated easily.

Respiratory infection begins as common cold which later proceeds into causing inflammation of bronchia and vocal cord. This in turn causes repeated coughing and difficulty in breathing. Children affected with croup infection may produce a loud barking cough similar to seal. Coughing and breathing problem becomes worst at night and the problem becomes severe when the child cries and gets agitated. For some children cough may be accompanied with mild fever also. Young children and infants are susceptible for developing croup infection. Since they have small passage of airways and when it gets blocked by mucus secretion, it can cause breathing problem. The symptoms may last for 3-5 days.

Croup is caused by viral infection (Parainfluenza virus) and spreads from one child to the other. The fine particles of droplets can easily get transmitted while coughing and sneezing. These droplets can remain on the toys and clothes of children and can spread to other children. The child should be kept separately and not sent to school until the infection is completely cured. Children of age group 1-3 years are often infected with croup. 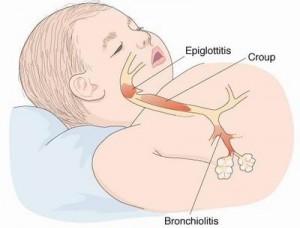 Your doctor can easily diagnose croup infection by listening to the breathing rhythm of the child and by physical exam of the throat and nostrils.

Home remedies are effective for most of the case of croup. To reduce inflammation of the airways your doctor may prescribe steroid medications. Epinephrine can also be given for clearing off obstruction from the airway. In rare cases the child may be admitted in hospital for giving artificial breathing through tube. Give maximum comfort to your child to keep him/her calm during the stay at hospital.

Crying and getting agitated can worsen the symptoms of coughing. The child should be kept calm and hence you can distract his attention by reading stories or singing songs. Artificial humidifier can be useful to moisten the air present in the room. Encourage the child to drink plenty of fluids to prevent dehydration. 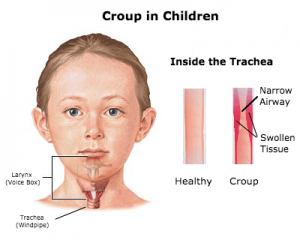 Croup is contagious and hence you can allow child to stay at home to prevent spreading of infection. Tell your child to cover the mouth while coughing or sneezing. Vaccinate the child properly.