You are here: Home / Information / What Is Scarlet Fever

Scarlet fever is marked by red rashes all over the body with sore throat and high fever. It is caused by bacteria that are responsible for strep throat. It is one of the common illnesses among children between the ages of 5-15 years. Initially, scarlet fever was a serious disease, but now medications are available for controlling the intensity of symptoms. If not treated promptly, scarlet fever can affect your vital organs like heart and kidneys leading to organ failure.

The child affected with scarlet fever would develop bright red rashes on his body. The rash would appear first on the face followed by trunk and finally it spreads till legs. The rash would feel like sandpaper and is profoundly found in folds of the skin like armpits, knees and groin. His face may appear flushed with pale mouth. The tongue would become red and bumpy marked by white coating.

Red rash is accompanied with moderate to high fever and throat pain. Rash would start peeling after a week or so. It becomes difficult for eating and drinking due to sore throat. The glands may get inflamed and enlarged around the neck. For some children, scarlet fever may cause nausea and vomiting.

Scarlet fever is caused by bacterium Streptococcus pyogenes and beta haemolytic streptococci. This is the same group of bacteria that cause strep infection. Once the bacteria enter the body it would release some toxin like substance that induces red rash on the body.

Scarlet fever is contagious and can spread to others through fine droplets of air when the affected child coughs or sneezes. The rate of infection is high during the incubation period of bacteria. Any infection on the body like wounds, burns can trigger scarlet fever. School going children have increased risk of developing scarlet fever.

The doctor would inspect the affected child closely, looking for sore throat and red rash. He would gently apply pressure on his neck to check if the lymph nodes have swollen. Throat swab is taken from the infected child’s throat to confirm the presence of strep bacteria.

Antibiotics are the first line treatment for scarlet fever. One should complete the full course of antibiotics even if the symptoms disappear in few days. Do not send your child to school until he/she is fully recovered, since there is every chance of spreading the infection to other children.

Antibiotics like penicillin or similar drugs are prescribed for 10-12 days. Your doctor would prescribe strong dose of medications depending on the toxicity and intensity of red rash on the body. The infected child should be given plenty of fluids to prevent dehydration. For managing throat pain ibuprofen can be given. 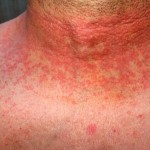 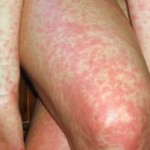 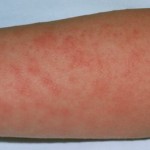 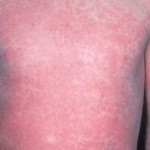 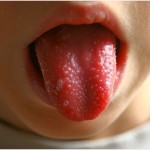 Children should be educated about the benefits of washing hands regularly and avoiding physical contact while playing. It is necessary to wash hands before eating and after using toilet. Instruct your child to cover his mouth while coughing or sneezing so that infection may not spread to other children.