You are here: Home / Information / What is Tinea Versicolor

Tinea versicolor is a type of skin rash caused by fungus. It is caused by yeast which grows in uncontrolled fashion in the skin. This infection can occur due to excessive sweat, oily skin or weakened immunity. Yeast lives in your body and it multiples suddenly several folds causing rashes. It is common among adolescents. Discolored patches are formed on the skin changing the normal skin color. It can occur on any part of the body but often is found on the shoulders and trunk region. Tinea versicolor (Pityriasis versicolor) can be treated using antifungal ointments and lotions.

The skin loses pigmentation resulting in discoloration in the affected areas. Often the symptoms are high on the back region, neck and chest. The skin color on these parts may appear darker than normal color. It may cause irritation and discomfort. Dark spots and discoloration of skin is more during warm climate than cool weather. It may cause dry scaly patches on some people.

Tinea versicolor is caused by fungus that already lives on your body. Under normal conditions the rate of fungal growth is minimal and controlled due to body’s immunity. But when conditions become favorable like hot weather, oily skin, hormonal changes and weak immunity the fungus multiply in excess causing discoloration of the skin.

Mere physical exam is enough to detect tinea versicolor. Your dermatologist may remove small skin scrapings which are tested in the laboratory to confirm the diagnosis. 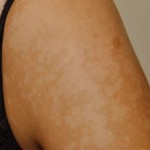 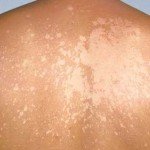 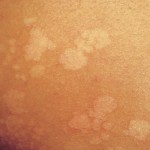 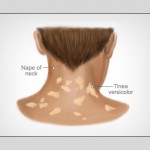 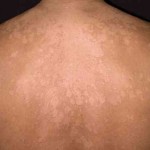 Mild form of tinea versicolor needs no treatment. Your doctor will prescribe antifungal creams or lotions if the infection is sever and recurring. Creams like Loprox, Penlac, Fluconazole, itraconazole and ketoconazole are given for tinea versicolor. Some of these drugs are available in the form of oral pills also. Shampoo, gels, creams and lotions that contain these chemicals are effective in controlling skin irritation.

The worst part of treatment is infection can recur after few weeks on the same person if conditions become favorable. For some people the skin discoloration may not fade even after several weeks of taking medications. Mild cases of tinea versicolor can be treated with clotrimazole, miconazole or Lamisil AT cream. The affected part of the skin should be washed and patted dry before applying any antifungal creams.

For persistent infection, you can take oral pills once or twicea month after consulting your doctor so that infection may not recur.