A white spot on the skin is a common problem and occurs due to lack of skin pigmentation substance called melanin. It can occur in the form of dark spots, white spots or other colored spots on the skin. Similarly it may occur either in the shape of circular spots or dark patches anywhere in the body. It is largely found in the neck, upper back, shoulders, forearms and the shins. These spots do not cause any pain or discomfort but has gained importance for cosmetic purpose.

White spots are common on men and women and people with fair complexion and those living in hot climatic conditions are prone to get more number of white spots than others.

One of the main causes for getting white spots on skin is vitiligo. Melanocytes present in the skin produces melanin, a skin pigment responsible for giving coloration to the skin. If melanin is secreted in less quantity or totally absent it can result in formation of white spots. It can happen due to autoimmune disorder where body’s own immune system destroys healthy cells of melanin causing discoloration.

Vitiligo is commonly present in 3 million Americans which count for 2-3 % of total population of America. White spots occur during the age of 25-35 years affecting both sexes equally.

Those who are predisposed to vitiligo or with family history are more prone to get white spots than others. People with Hashimoto’s thyroiditis an autoimmune disorder can get white spots in middle age. Men with grey hair during early ages are also under risk of having white spots quickly.

Exposed parts of the body like hands, legs, shoulders and back portion are quickly affected with white spots. Vitiligo will not affect the person totally. It leaves a gap known as period of stability during which the process of discoloration stops. This is followed by repeated whitish spots on the skin. It can affect the folds of the skin like armpits or areas in which there is skin injury. For some people it can occur on the areas where skin is injured or moles have developed. In rare cases it may develop on eyelids and on hair.

Your doctor can easily identify the white spots by thorough physical examination.

Pictures of White Spots on Skin :

Images, Pics, Pictures and Photos of White Spots on Skin 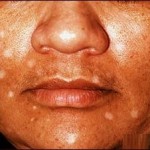 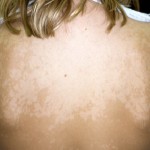 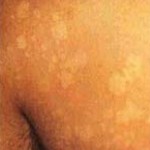 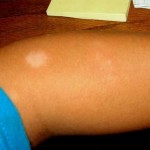 No treatment is required for white spots on the skin since they are benign (harmless) and does not cause pain or irritation. However many people want to remove it for cosmetic reasons. It is difficult to treat vitiligo but treatment can be given for improving the appearance and skin color. Your doctor will induce pigmentation process for getting back the normal skin color on the affected areas. He may also prescribe corticosteroid or give phototherapy for removing the white spots.

There are several types of white spots like Tinea versicolor, idiopathic guttate hypermelanosis and pityriasis Alba. Skin grafting is done for removing white spots, in which normal skin is replaced by removing it from other body parts and fixing it on affected areas. Antifungal drugs like clotrimazole and terbinafine are given for treating Tinea versicolor.

Idiopathic guttate are commonly seen on fair complexioned women and here white spots of size 2-5 mm in diameter can develop as scaly patches. It is believed to run on families passing the genetic factors from one generation to the other. Pityriasis Alba affects young children and is characterized in the form of dry scaly white spots on the face.

Your doctor will identify the real cause for such discoloration before starting the treatment. In case of deficiency or malnutrition he would prescribe supplementary vitamin capsules for producing natural melanin to remove discoloration. If the white spots are formed due to lack of amino acid by name tyrosine then you need to take drugs to produce that amino acid so that discoloration disappears in due course.