Yellow fever is a serious disease transmitted by mosquitoes and in some areas the virus becomes endemic causing death of many people. It is a viral fever found largely in African countries and in some parts of South America. It is reported that about 50% of people affected with severe form of yellow fever die each year; however this can be prevented by vaccination.

There will not be any signs and symptoms during the incubation period which may lasts for 3-5 days after you have contracted the virus. After 5 days the virus will assume an acute phase during which there can be mild-moderate symptoms. Some of the symptoms of acute phase of yellow fever are mild fever, headache, nausea, vomiting, body pain, drowsiness, muscle aches, acute pain in your back/knees, loss of appetite and redness in your eyes and face.

In the toxic phase, the symptoms will become worse. In some cases, toxic phase can be very dangerous causing life threatening symptoms. The skin color of the infected person becomes yellowish producing jaundice like symptoms. He may have severe abdominal pain followed by blood vomiting. Total urine output may reduce considerably indicating kidney failure. Some people may get bloody discharge from the nose and mouth. The heart function may collapse suddenly and for some there may be brain dysfunction. It can also cause grand mal seizures and coma in some people. Often, the toxic phase of the yellow fever will be fatal if not treated immediately. Due to prolonged infection the virus discharge plenty of toxins in the blood causing the above symptoms.

For many patients, the initial symptoms of acute phase will disappear for 5-7 days if proper treatment is taken. However for others the virus will enter into toxic phase followed by remission of initial symptoms. In the toxic phase, the patient will die within a week or two if the rate of toxicity is severe. 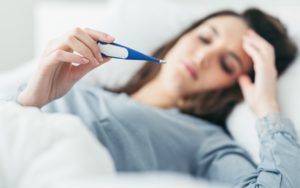 Yellow fever is spread by female mosquito of type Aedes aegypti which carries the virus. When it bites the person for sucking blood, it injects the virus into the bloodstream. Many cases of yellow fever are reported in Saharan African regions and tropic areas of S. America. This type of mosquito can breed even in the cleanest form of water.

Monkeys and human-beings are the prime target of yellow fever. The virus will usually travel back and forth from the mosquito infecting several millions of animals or humans. It would enter the mosquito’s bloodstream from the body of the infected person and circulates in its body for some period. Again it will enter the salivary glands of the mosquito preparing itself for getting transmitted into another animal or man.

Diagnosing yellow fever is not an easy task like any other disease. The disease cannot be confirmed based on its signs alone since the symptoms given above are the same for many other infectious diseases like malaria, dengue fever and typhoid.

Your doctor will collect complete medical history apart from asking few questions about your recent travels. He would request for complete blood test like ELISA test and polymerase chain reaction test. These tests will give report about the specific antibodies or antigens produced in the body in response to the attacking virus. It will take several days for getting the result of the test. Liver biopsy test done after the death of the patient would also reveal the presence of virus.

Transmission of yellow fever occurs when the infected mosquitoes bite the animals or humans. It is the mosquito that spreads the virus from one host to another.

1. Sylvatic Yellow Fever : It occurs in the monkeys that live in tropical rainforests of Saharan Africa. The infection spreads to other mosquitoes that feed on the feces of the infected monkeys. The mosquitoes will again spread infection to other monkeys and humans.

2. Intermediate Yellow Fever : It occurs as epidemic of small scale (restricted to specific zones). The mosquitoes that breed on water medium on the houses and forests will spread the infection to other people and mosquitoes. This occurs in small villages where there is close contact of people who are not vaccinated.

At present there is no antiviral drug available for treating yellow fever. Hence treatment can only be given for reducing the symptoms and preventing kidney failure. Blood plasma transfusion is done for removing the infected blood.

It is ideal to get vaccinated for yellow fever to prevent its infection. Effective vaccines are available for yellow fever and people who are planning to visit the Saharan African countries can consult their doctor about taking vaccination. The vaccination should be given at least 2 weeks prior to travel. Taking one shot of vaccination for yellow fever will give you comprehensive protection for ten years. It can cause minor side effects like fever and headache.

Vaccine should not be given for children below 9 years and for older adults since it may produce some complications. Vaccination is not given for pregnant women and infants and young children. Stay protected from mosquitoes by using mosquito repellants and by wearing fully covered thick clothing while visiting the infected areas. Avoid going out when the mosquitoes are in highly active stage. Using products that contain DEET can give you total protection from mosquito bites.