It is not known why some people get bone cancer and others not. Bone cancer is believed to develop due to genetic mutation like many other types of cancer. Cells begin to grow and multiply in repeated fashion without any obvious reason and accumulate in a place to form a tumor. This mass or tumor would gradually invade and destroy nearby tissues and organs spreading to other parts of the body. 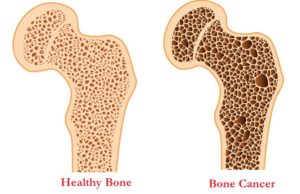 1. Multiple Myeloma – Multiple myeloma develops when cells grow in uncontrollable fashion forming a tumor in the bone. This is the most common kind of bone cancer developing in elderly people. This type responds to treatment and often it can be cured if treated promptly.

2. Osteosarcoma – This type of bone cancer occurs in children and teenagers and sometimes in older adults. Often osteosarcoma occurs in leg bones or bones of arm and in rare cases in the shoulders and hip bones.

3. Chondrosarcoma – This kind of bone cancer targets the thigh bone (femur) and shoulder bones and is popular in elderly people. It occurs on the sub-chondrial tissue of the bone that is found between the bones.

4. Ewing’s Sarcoma – In this type, the soft tissues adjacent to bones are affected and largely children and adolescents are targeted. It occurs in lengthy bones of legs and arms and also on the pelvic bones.

Based on the symptoms after completing the physical examination, your doctor may order for series of imaging tests like bone scanning of CT or MRI type. If the results are positive the doctor would consider doing a biopsy by removing small tissue sample from the affected bone for getting accurate picture of cancer. This can highlight about the stage of cancer and its intensity.

Biopsy can be done at doctor’s office wherein the doctor inserts a needle directly into the region of tumor and removes small tissue sample for further testing. 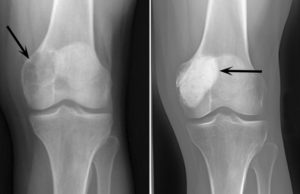 It is necessary for any doctor to identify the stage of cancer before attempting to treat it.

Like any other types of cancer, bone cancer treatment depends on the stage and health condition of the patient. Before starting any therapy your doctor would consider several factors like your age, sex, and grading of cancer. Radiation and chemotherapy are standard forms of treatment for bone cancer. However, in many cases your doctor may choose combination of therapies with surgery also.

Nowadays special techniques are administered for removing any tumor from the bone. Only affected part of the bone is removed along with some of the healthy tissues inside. In many cases the affected part like limb or arm is spared and only the tumor is removed successfully. Lost bone would be replaced suitably with artificial metals.

For some regions like that of hip bone the doctor would consider removing some part of the bone itself. Only in severe cases, the entire limb is removed or amputated from the body. The person would depend on artificial limb in future.

In chemotherapy medications are used to destroy the cancer cells completely. In radiation method, high powered energy beams are sent directly into the affected bone for destroying the cancerous cells. Often this is used in combination approach.