Bullous pemphigoid is a skin disorder marked by blisters on various parts of the body like upper thighs, lower abdomen and armpits. It develops largely on old-age people and it attacks them when the immune system is weakened for any reason. Exact cause that triggers formation of blisters is not known but it can develop due to adverse effect of certain drugs. Individuals who have genetic predisposition for developing these blisters are likely to get this skin disease. When the antibodies get accumulated in the soft layer of tissue known as “basement membrane” it produces cluster of blisters due to inflammation.

Immunosuppressant medications are used for treating bullous pemphigoid but sometimes it can endanger your life if your health is very poor.

This skin disease is characterized by blisters that produce severe burning sensation and itching. The affected area may get swollen and there may be intense pain. In case if bullous pemphigoid blisters is formed on the thin mucous membrane of oral cavity it may cause difficulty in eating and drinking. Apart from posing ugly appearance, this blister may cause pain and difficulty in moving the parts. The blisters contain fluid including some blood and it will not rupture when touched. The color of the blisters may range from dark pink to red. Lumps are usually formed on the areas of the skin that are folded like armpits, thighs and groin.

Exact cause of bullous pemphigoid is unknown. It is believed to be caused due to weakened immunity in old-age people. The antibodies released by the body are stored in the basement membrane forming thin layer which would eventually get swollen producing blisters or large lesions.

It is said that certain powerful medication like penicillin, sulfasalazine, etanercept and furosemide may also cause blisters. If the person is taking treatment for cancer then exposure to UV radiation can trigger formation of blisters on the skin.

The doctor may examine the blisters and perform biopsy of the affected skin layer to confirm the disease.

The main purpose of the treatment should be oriented towards reducing the pain and inflammation caused by blisters. Anti-inflammatory medications are given. Your doctor may prescribe immunosuppressant drugs for inhibiting the production of antibodies getting stored in basement membrane. Corticosteroid containing ointments are given for managing the pain and inflammation. Common drugs that are given for treating bullous pemphigoid are Trrexall, prednisone, and azathiprine. Very often combination of anti-inflammatory medicines with corticosteroids is given for getting positive results. 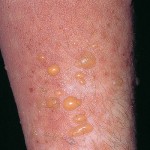 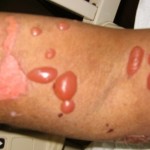 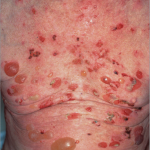 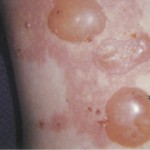 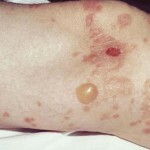 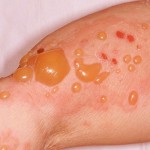 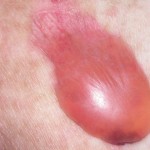 It is difficult to prevent getting blisters when your cells are predisposed for bullous pemphigoid. You can avoid staying long in direct sunlight. In case your skin is affected with blisters, then cover your skin with proper dressing for facilitating healing process.