If you see that your spouse is complaining about your bad breath, you should remember that you are not alone. Studies show that many people face this issue. However, most of them are embarrassed to seek medical advice. Thanks to the home remedies that will help you get the best relief. So, you need not have to feel embarrassed about getting help from others. You can try some home remedies on your own for relief. Do you know that cinnamon, the gift of nature can fight bad breath effectively?

Rather than using a chemical-based mouthwash, you can prepare a mouthwash using cinnamon. Moreover, chemical-based mouthwash might remove bad breath. But, the remedy will be just a short-term solution. Further, the chemicals used in those remedies might cause some damage to your gums and teeth. So learn how to make cinnamon mouthwash? Before that, it is better to first understand how cinnamon fights bad breath. 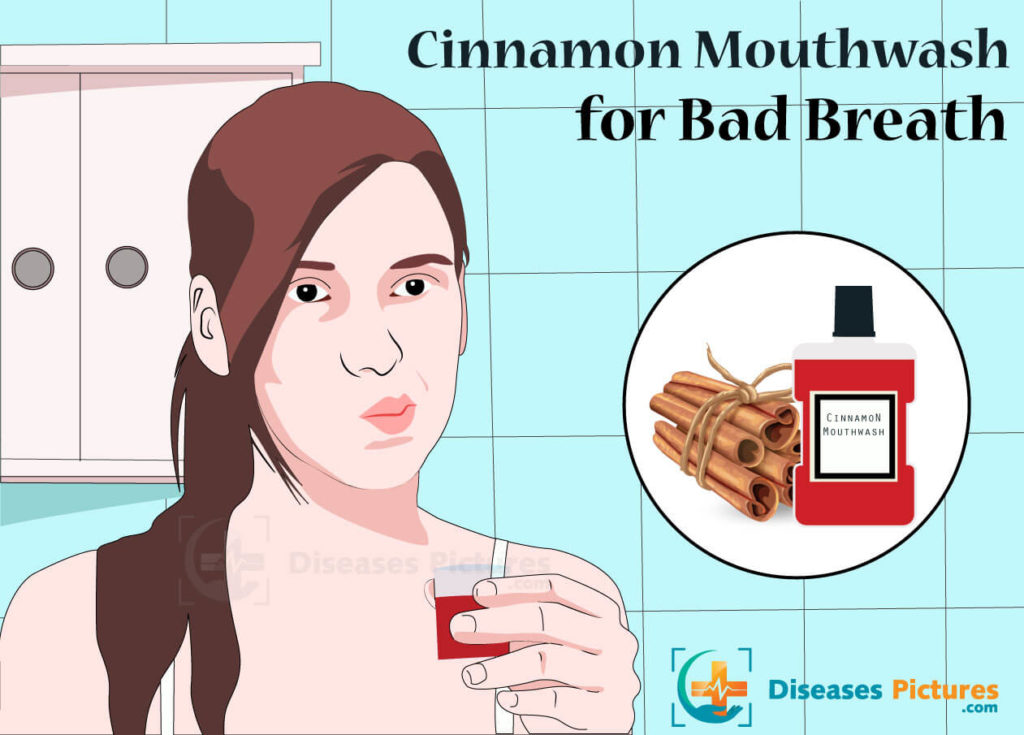 Dental Scientists from Chicago have found that the essential oil from cinnamon is effective in killing oral bacteria. It will kill the germs that impart the rotten-egg smell to the breath. When the bacteria and germs are killed using cinnamon mouthwash, you will get long-term and permanent relief.

Further, the cinnamic aldehyde present in cinnamon shows promising results against bad breath. This compound gives the principle flavor to cinnamon. So, cinnamon does not just stop with killing the bacteria causing bad breath. It also hides the bad breath with the help of its natural flavor.

Why Cinnamon and Not Mint?

Some might have suggested you to use mint for bad breath relief as a home remedy. But, there is a difference between the two. For instance, mint just masks the bad breath. But, cinnamon in addition to masking kills the bacterium that causes the bad breath. In turn, it provides long-term and permanent relief.

Further, a report was submitted by the International Association for Dental Research. As per this report, the group that took cinnamon gum had nearly a 50% reduction in the oral bacteria. It is in comparison with a group that chewed mint gum. The reason is the anti-bacterial property of cinnamon. Now, you know the effectiveness of cinnamon. So, you might be interested in cinnamon mouthwash. To make the mouthwash at home, you should first know the ingredients:

You will also need a jar or a bottle with a tight fitting lid to store the mouthwash after preparation.

How To Make Cinnamon Mouthwash? 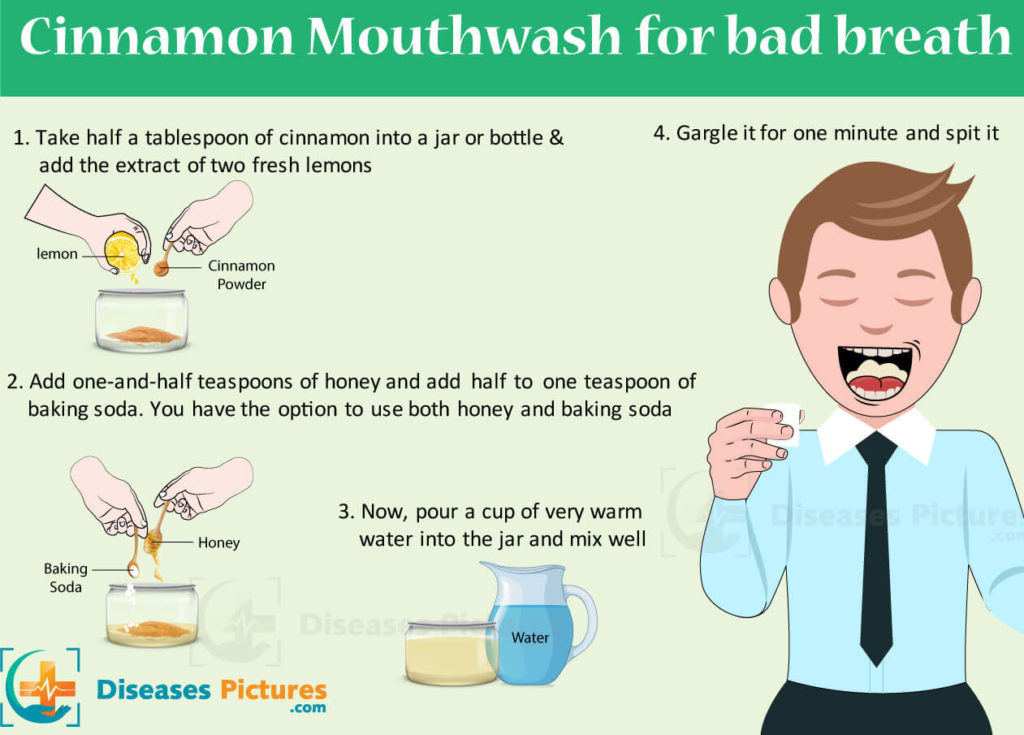 Do you wish to freshen up your breath? Now, you can just take the jar. Shake it well and take one to two tablespoons of the cinnamon mouthwash. Do not consume it internally, just gargle it for one minute and spit it.

How Does This Remedy Work?

It is from New Zealand and it is special for a reason. Yes, it has methylglyoxal and its level is 127 times more as compared to acacia honey. Acacia is the regular honey that we see in stores. The methylglyoxal is known for its antimicrobial actions. If you cannot get Australian honey, you can use organic raw honey. Lemon has a natural citrus scent. It will fight the nasty bad breath effectively. Baking soda in addition to getting rid of bacteria will also help with teeth whitening. For these reasons, this cinnamon mouthwash is an effective remedy for bad breath.

An excellent alternative to this mouthwash mentioned above is Apple Cider Vinegar and Cinnamon Mouthwash. 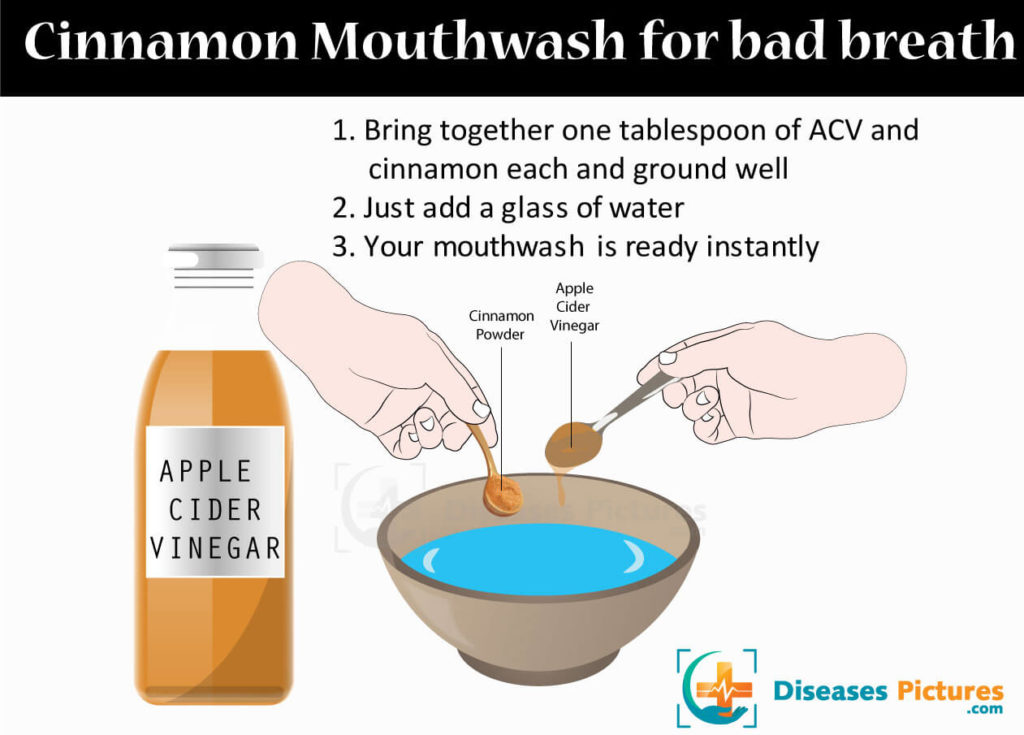 How Does It Work?

You know the effectiveness of Cinnamon. When it comes to ACV, it is effective in balancing the pH level in the mouth. In turn, it creates an unfavourable environment for the bacteria to survive and to grow.

If you have the cinnamon sticks at home, you can just make an instant mouthwash. It will help you get rid of bad breath. 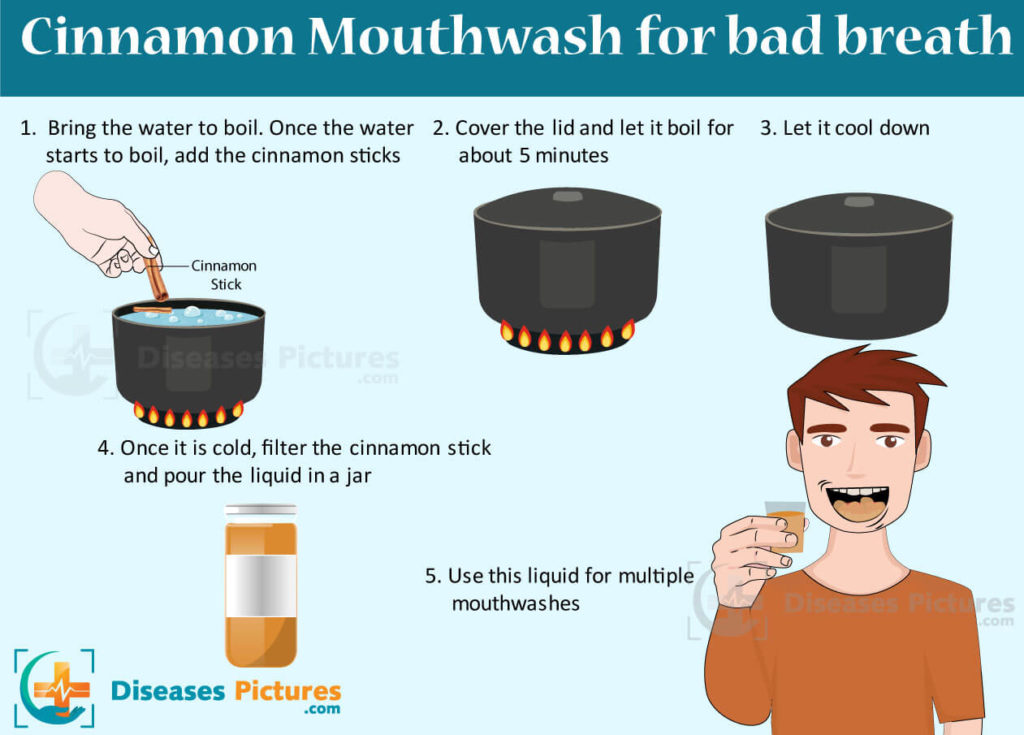 In short, cinnamon is a gift from nature. In addition to adding flavor to the dishes, it can effectively add aroma to your mouth.  Rather than relying on a chemical-based mouthwash, you can make a cinnamon mouthwash at your home. In addition to being safe, it will also help you save a lot of money. Most importantly, it will bring effective results as well.

To avoid bad breath, quit smoking, floss daily and brush two times a day. You can do these things and can regularly use the cinnamon mouthwash to stay clear of bad breath.