The vagina is the fundamental female reproductive organ that connects the uterus with the outer genitals. It is thin muscular tube of the female genitals through which the baby passes out during delivery. Vaginal cancer can occur anywhere on the canal from the opening of the uterus to the outer genitals. It often occurs in the soft lining of the vagina. Cancer can also spread from other body parts to the vagina. A woman diagnosed with vaginal cancer in early stage can get it fully cured and vaginal cancer in the later stage is difficult to get treated. 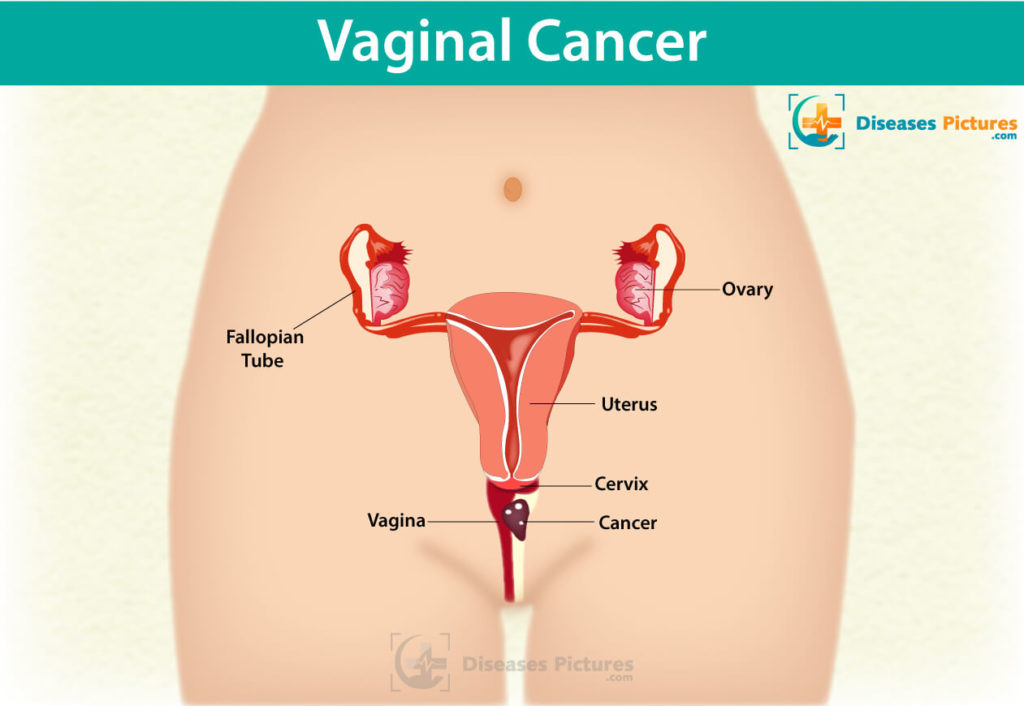 There are two types of Vaginal Cancer :

Girl child who are exposed to the drug DES diethylstilbestrol in her mother’s uterus are prone to develop vaginal adenocarcinoma cancer. Women who are sexually active right from the early ages and women who have more sex partners are at high risk. In rare cases, vaginal cancer can spread to other body parts when they metastasize to liver and bones.

Very often vaginal cancer does not show any symptoms and is diagnosed during pelvic exam or Pap test. Some of the common signs of vaginal cancer are pain while having sex, bleeding between periods, lump or lesions on the vagina, watery discharge from the vagina, sudden (unexplained) pain in the pelvic region, pain while urinating and constipation. Since these are general symptoms of many other diseases it is difficult to diagnose vaginal cancer using these symptoms alone.

Exact cause of vaginal cancer is not known. Normally old cells should die to give way for newer cells formed during genetic mutation. But for some reasons, old cells do not die causing accumulation of cells forming a tumor which becomes cancerous. Such cancerous cells would attack the nearby tissues and spread to vital organs also if left untreated.

Vaginal cancer can be diagnosed during pelvic exam done for some other reasons. Your doctor would thoroughly examine your vagina and through a sterilized speculum she would open the vaginal canal to check for any abnormalities. Pap smear test is a simple test for detecting vaginal cancer. It is good to have this test done once in six months if you have high risk factors for cancer.

In some cases, colposcopy is done using magnifying device for inspecting the inner parts of the vagina. Once the presence of vaginal cancer is confirmed your doctor will do imaging tests like PET to find out the stage of cancer and how far it has spread.

Staging is crucial in any type of cancer and a doctor should have complete knowledge of staging before treating it.

Your doctor will consider factors like your age, health condition and staging of cancer before starting the treatment.

In the first stage of vaginal cancer surgery is done for removing small sized tumors from the vagina. Some parts of healthy tissues are also removed from the areas surrounding it to avoid any future complications. Part of the vagina is removed if the cancer has invaded the outer portion of the vagina and the entire vagina is removed through radical vaginectomy if the cancerous cells have invaded the nearby lymph nodes. In some cases the uterus along with ovaries are removed by hysterectomy if the cancer has spread to the entire uterus.

In rare cases pelvic exenteration is done for removing the major portion of the pelvic organs. Since the bladder and rectum are completely removed during this surgery the surgeon would make an opening in the abdomen for collecting the urine and stool which would get collected in the ostomy bags before getting expelled. Artificial vagina is constructed using skin grafting if the vagina is removed during surgery. But this can create problems while having sex.

In this therapy, high energy beams of X-rays are administered into the pelvic floor for destroying the cancer causing cells. It can be done either in the form of external beam radiation wherein the person would be receiving radiation waves from the external machine or as internal radiation in which small radioactive instruments like wires or seeds are inserted into the vagina for specific timings. Minute volumes of radiation are emitted by such device to destroy cancerous cells.

In this method drugs are given to destroy cancerous cells in the vagina. Often this method is combined with radiation therapy for getting the best result.

Tips for Coping with Vaginal Cancer :

It would be really shocking to know that you have vaginal cancer. But don’t lose hopes and discuss with your doctor about the stage and treatment options. Collect complete information about your health and know how far it has spread. Share your feelings with your partner and certainly it would affect your sexual life. There are ways of maintaining intimacy other than having sex. The side effects of radiation and surgery would be interfering with your normal sexual life. Interact with friends of support group who are undergoing the same procedure like yours to get some relief.

There is no way you can prevent getting vaginal cancer. But you can always follow certain methods to reduce the risk of developing cancer. Get the pelvic exam done routinely so that cancer can be detected in early stages. Young girls can get HPV vaccine to reduce the risk of getting sexually transmitted diseases.