Adrenal gland tumor is a rare disorder occurring in adults of age group 45 and above. It can be cured completely if detected at early stage. In most of the cases, the tumors are detected only years after they have developed and by that time it would have invaded the nearby organs. Adrenal gland is an aggressive type of cancer caused due to excess of adrenal hormone. There will be sharp pain in the abdomen region once the tumor has grown larger in size. This tumor is capable of spreading to even distant organs through metastasis affecting the functions of liver, bone and even lungs.

Adrenal glands are one of the ductless glands found above the kidneys and these glands are surrounded by connective tissue or thick layer of fat. Adrenal gland takes the shape of triangle and consists of many parts inside. It has adrenal medulla at its center which secretes hormone epinephrine or adrenaline and nor-epinephrine. Both these enzymes are important for regulating the functions of nervous system. Adrenal gland is covered by thick outer cover called adrenal cortex which produces steroid hormones which are responsible for regulating the fat molecules in the body. Adrenal gland also secretes sex steroids like androgen and estrogen.

Cells in the body are often replaced with new ones. Tumors develop when this process is disrupted in which cells rapidly grow before the withering of dead cells. Tumors are of two types, malignant (cancer causing) and benign (non cancerous cells). 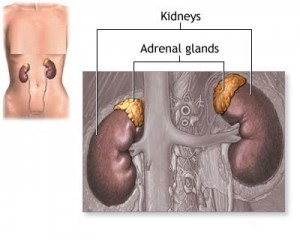 Once tumor is formed it produces excess of steroid hormones. In case excess of aldosterone is released it may cause Conn’s disease having symptoms like increased blood pressure, reduction of potassium ions in blood and decreased renin produced by kidneys. It may also cause weakness, muscular cramps, craving for water and frequent urination.

For people with excess of cortisol hormone, it may cause Cushing’s syndrome having symptoms like increase in weight due to water retention, swelling of face due to deposits of fatty molecules on the neck and face. Red marks on the skin, excess of hair growth are also seen. Some people with this syndrome may get diabetics and are susceptible to mood swings and mental changes.

Excess of sex hormones are produced in some patients causing virilization which may produce more of masculine activity like harsh voice, loss of hair and excess of growth on the clitoris (women’s genital). For men this condition can cause impotence and breast development. All these are symptoms of adrenal gland tumor. In addition, individuals with tumor on adrenal gland can also feel fullness in the stomach, bloated sensation with pain on the right abdomen. Some people may feel hefty stomach or huge mass on the stomach region even before eating.

Exact cause of adrenal gland tumor is not known. There are no ways to prevent his disorder.

In case of suspicion, your doctor will order for blood test for detecting quantity of adrenal hormones. He may order for X-ray, CT scan for analyzing the tumor size and how far it has spread. Your doctor may perform cortisol test in urine to assess the extent of steroids present in it. For detecting excess of aldosterone hormone, blood test is done. Computerized Tomography test is done for getting clear picture of the tumor. PET test is done to find the extent of rapidly growing cells in the adrenal gland.

In the first stage, the tumor is less than 5 cm in size and will not spread to other parts. In the second stage it may grow in size but still under control. But in the third stage, the cancerous cells will grow further spreading into the surrounding lymph nodes and other organs. And in the final stage, the cancer will spread rapidly to other vital organs of the body. 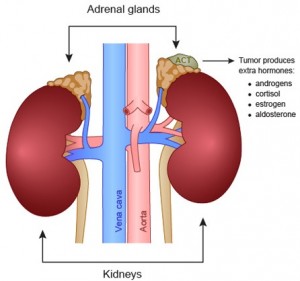 If the adrenal adenomas are not cancerous, it is enough if the doctor monitors the gland and its growth by CT scan and need not have to be operated. If the adenoma is detected, it can be removed using laparoscopic procedure where small incision is made on the abdomen and the entire process of removing adenomas is done through microscope. If the size of tumor is large or if there is any other complications, then open surgery has to be performed using large incision for removing the tumor.

Even after surgery, these tumors can recur on the same patient after few years. It is necessary to take cortisol orally as per the instructions of your doctor to prevent getting it again. Adrenal cortical cancers can be operated through surgery. In many cases, due to late detection, the cancerous cells will invade other organs causing more damage. In this case, laparoscopic surgery is not useful since the tumor has to be removed in one piece or as a whole. In rare cases, adrenal tumors will grow large in size and affect the blood vessel that carries blood to the heart, thus blocking it. Chemotherapy is performed both by giving oral medications and IV injections. They are powerful enough to kill cancer causing cells but have some side effects.