Each year around 4.8 million Americans die due to cigarette smoking of which about 50,000 die of passive or secondhand smoking. Nicotine addiction is reported to be 2nd leading cause of death next to heart attack and stroke worldwide. Smoking causes cancer, COPD (chronic obstructive pulmonary disease) and many other respiratory illnesses. If smokers decide to continue using tobacco there would be about 10 million deaths by the year 2020 due to tobacco. And this can cause the governments of developing countries more than $200 billion loss per year.

Cigarette contains many other toxic substances including tobacco. The word dependence implies one cannot stop using it though he/she knows that it can produce serious effects on his/her health. Nicotine dependence can alter your brain functions, physical illness and much more chronic problems than you think. Without your knowledge, you will be seen become addicted to tobacco and related substance.

Stopping smoking can cause irritability and other symptoms but it can be treated and fully cured. It is the nicotine in tobacco that primarily causes dependence but there are other toxic substances present in tobacco. Smokers are at increased risk to heart diseases and cancer than others. 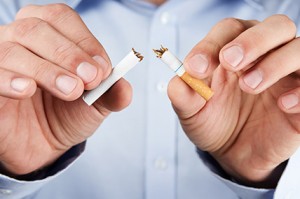 Several factors can induce one to smoke including psychological, social and genetic factors. Most of the smokers start this habit in their teens.

Three major causes are known to trigger smoking in teenagers :-

Many teens want to look mature and get expected by their friends. They are pressurized by their friends to indulge in smoking since they see their parents and relatives are smoking. And there are teens who start smoking just for pleasure and experimenting it. In some countries laws have been in force that bans smoking under teenage which stills add excitement.

Adults indulge in smoking for various reasons like work pressure, stress, relationship issues, economic and personal problems. In their belief system smoking gives temporary relief and relaxation which induces them to smoke more. Smoking gives a sense of good feeling and pleasure. Tobacco contains some psychoactive substance that produces effect of euphoria which in turn reinforces the user to smoke more. Those who wish to quit smoking would have to face the challenge of nicotine withdrawal symptoms.

Nicotine dependence occurs due to prolonged use of tobacco and related substances. These signs indicate that you have got addicted to nicotine :-

You will not be able stop smoking even if you want to. You would have made sincere efforts to quit smoking but you cannot stop smoking.  Quitting smoking suddenly can cause signs of anxiety, restlessness, mood-swings, frustration, anger and strong craving. It can cause symptoms of sleeplessness, digestive problems, and weight gain. There are people who have already developed serious problems in heart or lungs due to smoking, and still unable to quit smoking. And there are some individuals who would give up social activities if they are not allowed to smoke.

Some individuals cannot resist smoking after a meal or with coffee or while talking on the phone or meeting certain friends or during stressful situations. For some people smell of smoke or burning cigarette triggers them to smoke.

How You Get Addicted To Smoking ?

As one inhales smoke nicotine present in the tobacco is sent into the lungs. It mixes with blood and sends signals to the brain within seconds activating neurotransmitters causing change in mood and behavior. Dopamine is released in the brain producing good feelings and sense of well-being. Gradually the person gets addicted to nicotine and smoking. 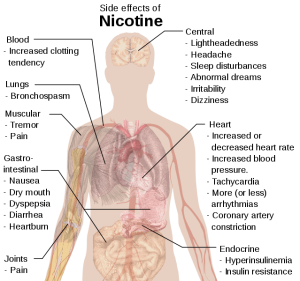 Your doctor may ask several questions to know to what extent you are nicotine addicted. It includes number of cigars you smoke everyday and physical and emotional symptoms it has caused in you.

Smokers (regular) cannot stop smoking even if they try. Without the help of doctor and support team it is very difficult to quit smoking. Treatment for nicotine dependence is available in the form of medications, counseling and therapy.

Nicotine replacement therapy and many other drugs are highly effective in helping you to quit smoking. Pregnant women and breastfeeding mothers should not follow nicotine therapy without consulting their doctor.

The main focus of nicotine replacement therapy is to give the patient nicotine without any harmful chemicals. The products used in this therapy help one to overcome the cravings for tobacco and withdrawal symptoms. Both OTC and prescribed medications are available in NRT.

They are in the form of nicotine patches that can be easily attached to the skin. The person should use new patch every day and follow the patch for 8 or more weeks. Here the medication is sent into the skin easily by wearing the patch. However you have to start using this product only if you are determined to quit smoking and from the day after you have stopped smoking. Nicotine gum is available in the medical store which can be used for managing the cravings caused by quit smoking. All you have to do is to chew the gum and place it between the gum-line and cheeks in your mouth. Nicotine gets absorbed slowly in the blood through this method. It can cause slight irritation in the mouth.

Nicotine lonzenges like Commit or Nicorette can also be supplemented in NRT which also works on the same principle like nicotine gum. You can use lonzenges for every hour and don’t drink anything hot or cold after using the lozenge. Prescription medication for NRT is available in the form of nasal spray or inhaler. Nicotrol NS can be easily sprayed into the nose which gets absorbed into the blood vessels. This method facilitates quick absorption of nicotine in your blood. Based on the individual patient, your doctor may suggest using this spray about 4-6 months daily. It can cause mild side effects like sneezing, throat irritation and runny nose.

Nicotine tablets can be used as oral pills for specific periods to overcome smoking. Nicotrol is an excellent inhaler that delivers the vapor of nicotine directly into the mouth. The inhaler looks very much like a cigar holder and when you puff on it, nicotine is sent into the blood directly.

Majority of smokers start smoking in teen years and hence it is the responsibility of the parents to restrict the tobacco access to them. Parents should be aware of the happenings and follow discipline at home to become a role model. Talk freely with your teens and help them in the beginning itself. Students should be counseled in advance about the harmful effects of nicotine and smoking.