Runny nose popularly called as stuffy nose arises when there is obstruction in the path of airways of the nose cavities. A fluid like discharge is sent out from the nasal passage to clear the block. The main causes of runny nose are allergies, sinus infection and influenza. The blood vessels and nasal tissues secrete large amounts of mucous that come out of your nose.

Running nose is marked by large amount of mucus discharge released from mucous membranes. There would be back-up of mucus pressure in the nose causing stuffy nose. This blockage of nasal cavities will cause difficulty in breathing. Very often, it forces the person to breathe through mouth and it may cause headache and facial pain.

Running nose or rhinorrhea may also cause sinusitis when there is blockage in the passage of sinus cavities. Sometimes, the mucus gets filled into the Eustachian tube of the ears, causing infection in the ear and ear pain.

Some persons may complain of sore throat and sneezing problems due to running nose.

There are ranges of causes for running nose. It may be due to rhinitis, sinusitis, allergy or common cold. Some of the underlying disease like chickenpox, deviated septum, DiGeorge syndrome, influenza, hay fever, measles, viral and bacterial infections, nasal polyps, rubella and pregnancy also cause runny nose. The list is very long and it also includes all forms of allergy ranging from perfume to smoke allergy.

During this stage, the oxygen level of the body becomes lesser than the normal health condition. It can occur due to chronic hyperventilation and due to habitual breathing through mouth. The mucus released from the nose is normally yellow or green which indicates the presence of bacteria inside.

Running nose is commonly seen during winter months. The air inhaled through nasal cavities gets warmed up to balance the outside climate and during this process, the nasal holes should be repeatedly filled with mucus. This in turn produces excess of watery discharge causing running nose. Thus it results as body’s natural defense mechanism to protect from extreme temperature.

In rare cases, running nose may develop due to milk allergy (lactose intolerance). It also occurs due to shedding of tears when a person gets emotional. It produces excess of tears making the liquid to flow into the nasal cavities causing running nose. 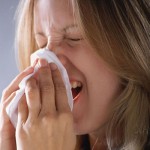 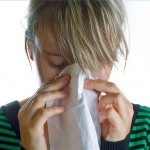 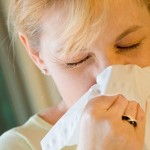 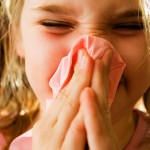 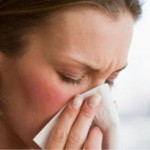 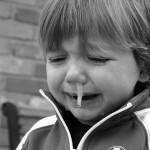 Treatment of rhinorrhea is to be aimed to remove the underlying causative factor. In case the stuffy nose is caused due to allergic reactions, then the person should identify the factor that causes allergy and avoid them completely. For some it can be due to pet allergy or pollen grains allergy. You should stay back from the activities that triggers allergy.

Very often, runny nose is caused due to infections and hence no treatment is necessary. You can practice simple respiratory exercise to clear the runny nose easily. You can try home remedies like inhaling hot vapor which is very effective for clearing nasal congestion due to infection or common cold. Alternatively, you can just blow out the mucus or use nasal spray.

For treating allergic type of running nose, you can buy antihistamines from the medical store. For getting instant relief, nasal irrigation is done by cleansing the nasal cavity with saline water.