When the sinuses (a soft tissue lining) of the nose gets inflamed or blocked due to fluid accumulation, sinusitis develops. Sinuses are responsible for exchange of air particles and when they get clogged due to bacterial growth or fluids like mucus it leads to a condition called sinusitis. Inflammation develops on the air cavities of the nose causing sinusitis. Bacterial or fungal infection can cause swelling of sinuses.

Sinusitis can cause symptoms like headache, fever, sore throat, stuffiness in the nose and nasal discharge. It can be due to bacterial infection if the above symptoms persist for more than a week and not improving even after taking OTC drugs. Sinusitis can be treated with antibiotics supported with decongestants. More than 30 million people are suffering from sinusitis infection in the world.

There are 3 major types of sinusitis based on the degree of infection.

Anybody can develop sinusitis. But certain structural differences and overgrowth of polyps increases the risk of getting it. If common cold becomes serious leading to swelling of mucus membrane of the nose, it can increase the risk of sinusitis. People having narrow passage of drainage ducts, recurrent blockage in the ducts, getting nasal polyps in the nose are at increased risk. People with compromised immunity and people who work in allergy prone environment have high risk of developing sinusitis.

Sinusitis can produce symptoms like pain on the face (near the nose and on the cheeks), stuffy nose, nasal discharge, nasal block, and congestion in the nose, loss of smell, fever and fatigue. Some people may have bad breath in their nose due to bacterial infection. Presence of thick yellowish mucus from the nose indicates bacterial infection.

Sinusitis develops if the small passage of sinuses gets blocked thereby interrupting the normal airflow. Some of the common causes of sinusitis are common cold, swelling of nasal tissue lining, allergies, growth of nasal polyps and smoking. Certain medical conditions like cystic fibrosis can reduce the water content of mucous secretion leading to inflammation of sinuses.

Some medications like antihistamines can cause dryness in the nose disturbing the normal airflow. Certain irritants like dust and smoke may damage the cilia (small hair-like fibers of sinuses) leading to sinusitis. Bacterial growth inside the nose can clog the mucus causing swelling and irritation.

During the physical examination, the doctor will use lighted instrument to check your nasal cavity for the presence of clogging of mucus or growth of nasal polyps. He would gently touch the sinuses to verify tenderness. He may order for mucus culture or testing for allergy. In rare cases nasal endoscopy is done.

Method of treatment depends on the root cause of sinusitis and its type. For bacterial infection, antibiotics are given for two weeks along with decongestants. Most of the signs will improve when the person starts taking antibiotics. Amoxicillin is given in suitable strength or sometimes Augmentin is prescribed to destroy any kind of bacteria.

Nasal sprays obtained over the counter can be used for clearing off the nasal block. For chronic type, apart from medications, steam inhalation is necessary. Warm compression can be applied on the face to alleviate the pain. If the person does not respond to antibiotics steroids are prescribed. If virus is the reason for sinusitis suitable antiviral drugs are given. In rare cases fungal infection can cause sinusitis for which early diagnosis and suitable treatments are to be given. 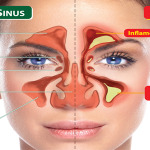 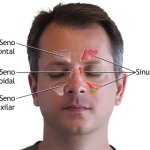 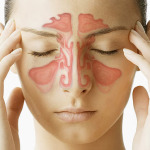 Surgery is the last choice for treating sinusitis if any of the above method is not effective. Local anesthesia is given using endoscopy for clearing the block of sinuses and to remove nasal polyps if any.