Anorexia nervosa is a serious psychological eating disorder which is characterized by refusal of eating. People affected with this disorder will not maintain healthy weight and will have intense fear of weight-gain. They will use all means for refusing to eat and very concerned about their body image. It is often marked by preoccupation of thoughts of being thin. Though it is prevalent among young generation females still it can affect people of any ages.

It would seriously affect your health and wellbeing. People will have serious desire to lose weight and that becomes top priority in their life. Persons affected with anorexia will have dreaded feeling of getting fat and eating a normal healthy food becomes impossible for them. They are often concerned about losing weight and dieting and spend little time with family and friends. They go to the extremes of losing weight and sometimes they need to be hospitalized to prevent loss of life. They will not stop dieting even when they become skinny since it is a self destructive disorder.

Two types of anorexia nervosa are recognized. They are restricting type and purging type. In the first one people achieve the desired weight loss by restricting the intake of food and indulge in fasting, dieting and over exercising. In the second type they indulge in vomiting and using laxatives for vomiting the food taken immediately to prevent weight gain.

These are the common illusions or preoccupied thoughts with people affected with anorexia :-

Parents and family of the affected people will have great concerns about them in not eating properly. They will observe sudden weight loss in the affected person and sudden change in their eating habits. Actually anorexia is not an eating disorder, but it is psychological disorders that seriously occupy one’s thoughts and ideas. By proper counseling techniques it can be cured.

As a person develops anorexia, he/she becomes preoccupied with his looks in the mirror and become overly concern about what to eat and what not.

The person will be seriously dieting to become even thinner and thinner despite being dangerously lean. He will avoid intake of carbohydrates completely and fatty foods He becomes obsessed with fat and calories and nutritional value of each foodstuff. He lies constantly about eating and makes excuses with his family and friends. He thinks about food most of the time spending more time in collecting recipes but on the contrary he eats very little or nothing.

People affected with anorexia will have sudden rapid weight loss and will have intense feeling of being fat though they are actually underweight. They spend most of the time in front of the mirror overly concerned about their body image and looks and are often self-criticizing in nature.

Some people indulge in using laxatives for achieving weight loss and they would disappear for sometime while taking meals for throwing the food inside the bathroom. They will do exercise vigorously even during illness and bad weather. If at all they eat something, they indulge in induced vomiting by using drugs.

Anorexia is a complex eating disorder caused due to social, psychological and emotional factors. Low self esteem and familial problem can be major causes. Psychologically people affected with anorexia are perfectionists. They are known to excel in anything they do but inside they are totally different personality, craving for help and feeling worthless most of the time. They are overly critical about their appearance and will never get satisfy whatever the weight they lose.

Family pressure can be a cause for this disorder. Children or adolescents who are overly controlled and dominated by their parents become overly concerned about their looks in due course. Even stressful situations like love failure and onset of puberty can invoke this feeling.

It is believed to be caused by genetic factor running in families. People with anorexia will have high cortisol levels in their brain contributing for heightened stress and decreased secretion of nor-epinephrine and serotonin which are hormones that gives one well-being state of mind.

If a person stays on severe diet continuously it will definitely have serious effect on his health. Some of the harmful physical effects of anorexia are poor memory, severe mood swings, constipation, dizziness, weakness, headache, lack of energy, delayed thinking and brittle nails, tooth decay and depression. 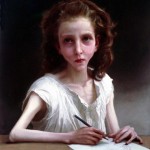 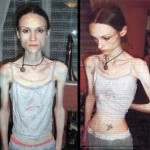 Counseling the person about the serious effects of anorexia is the first step for recovery. The person should be made to admit that he/she is suffering from this disorder. The person should come forward to talk openly to someone to share her problems. You can stay away from public places that trigger the thought of you being thin. Avoid reading fitness magazines and stop reading information about weight loss.

It is possible to overcome this illness by professional help in proper time. It affects both mind and body together hence your doctor will have to give supplementary medicines apart from counseling. Treatment is given for getting the person back to normal weight and changing her ideas about self image and food. In-patient treatment is given if the condition of the patient is very serious. Intravenous fluids are given for preventing dehydration and malnourishment. Critically low weight people need to be hospitalized for monitoring their health.

The person will be put on intense nutritional counseling. A dietician will prepare a healthy diet chart that includes essential nutrients needed for the body. Counseling is done for removing negative thoughts of self esteem and for coping up with difficult situations and relationship issues.